"Confessions of an Optimist" Sirens 2019

(Below is a review about this CD I have sent out to various publications/websites I have worked for over the years. I have been acquainted with Molly and Kay's music for a very long time, both as Sirens as in various bands and line ups. They are very talented, write good songs, and make enjoyable records. Too bad their type of music does not get played much on commercial radio. Go out and buy the disk and give them some support.) 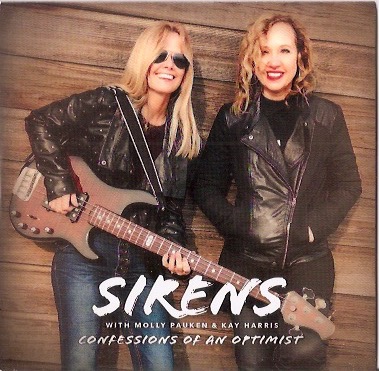 If you live in Central Ohio you are never too far removed from the work of musicians and songwriters Molly Pauken and Kay Harris. They do a ton of commercial and studio work; occasionally tour with national acts; participate in tribute shows; and play regularly with popular local and regional bands. This has been the life for the last twenty years for these talented ladies.
When they can fit it in they record and perform with their own group Sirens, often backed by a talented group of Ohio based musicians. Over the years they have occasionally put out Sirens CDs, and the most recent is Confessions of an Optimist. The 11-track release was recorded and mastered in both Columbus and Nashville. The songs are all Pauken/Harris compositions, and show off Harris’s catchy vocals and Pauken’s mastership of everything with strings, especially the mandolin and bass.
There are a bunch of good songs on the disk. “Get You” and “Wrap Me Up” both have a funky, upbeat feel to them. “Everything” has a full band sound.  On “Naked as Fools” Harris shares vocals with lead guitarist Hadden Sayers on what might be the best cut.  “A Lot Like You” shows Harris’s range, while “Wake Me Up” is both upbeat and soulful. The heartfelt “That’s All” is the best of several strong ballads. “Only Love” is the closer, and features a piano intro by Kevin Patrick Sweeney and fine guitar work by Sayers.
Confessions of an Optimist features gifted songwriting from a perspective of slightly older woman, with a sound that’s both a bit rootsy and a bit country. This is a very good CD and I highly recommend it.  Hope it gets them some airplay outside of Columbus and on some of the streaming services; Molly Pauken and Kay Harris deserve the national recognition.
For more information about Sirens and Molly Pauken and Kay Harris check out their Facebook page at www.facebook.com/pages/Sirens.

A Short Note about my Posts...

Except for an occasional music or play review, or some photos from a family function, most of the posts over the last year or so are about football, specifically coaching football. I had planned on last fall to be my last season, and I kept an unorganized diary, as well as many pictures, from the 2018 Thomas More season. I had planned to use the structure of the season to be the frame story of my long talked about coaching book. But...
My friend Dave Armstrong took the president position at St. Thomas University in Miami, Florida. One of the attractions, besides many, to Dave about the job was St. Thomas was a good sports school that has never had football. Starting a football program immediately gave the college a spike in enrollment tat it needed, and also got Dave to put together a very good coaching staff in a part of the country loaded with talented but very few if any small schools playing football. I was talked to come down and joined the coaching staff and the faculty in January 2019.
So my coaching book's title has gone from something like "Last Seasons," to "Last and First Seasons." A lot of the notes I post on this blog are to make me remember things when I go back later to write about them. For the few of you who read this blog regularly I hope you can decipher some of what I'm talking about.
Out first season ever kicks off September 7 in Miami against, of all schools, Thomas More University. Will that be a special occasion or what? Check out more about St. Thomas Football at STU.EDU and click on athletics.