First News Reports/Loss to Point U. 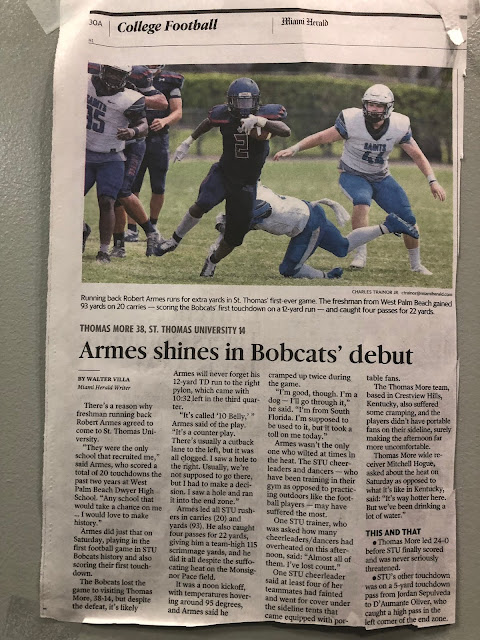 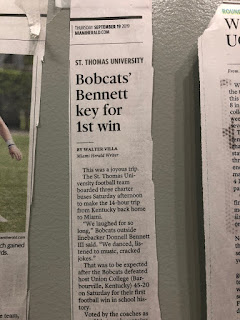 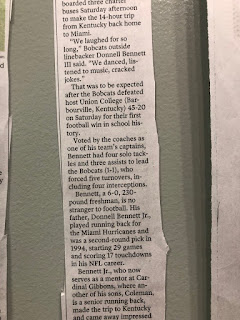 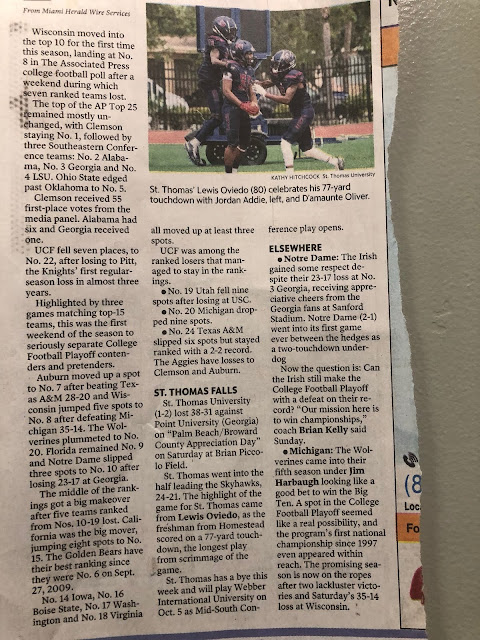 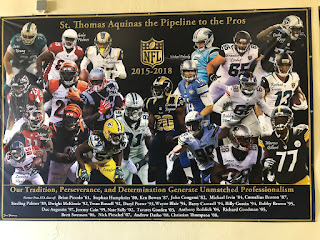 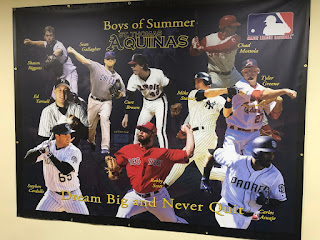 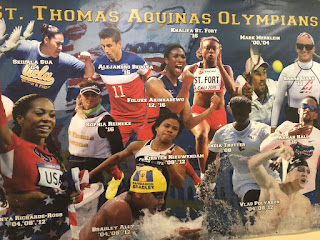 Next Game:
Point University
9/21/2019 | 12 p.m.
ESPN Deportes Miami 990AM
BARBOURVILLE, KY. (September 14, 2019) – As the game clock wound down to zero, a pair of Bobcats offensive lineman (Captain Joey Saurez and Jayce Collins) lifted Gatorade coolers and doused Head Coach, Bill Rychel in a victorious shower. Once again, St. Thomas University football made history, this week, celebrating the first win in the program's history. In the program's first road-trip, the Bobcats played the Bulldogs of Union College (0-3), emerging victorious with a dominant 45-20 victory.
St. Thomas was in control of the game from the opening kick-off, starting the game on the offensive side of the ball for the second straight week. Following a quick three-and-out, the Bobcat defense forced their first turnover of the contest on Unions first play from scrimmage.
Quarterback, Jordan Sepulveda (8/18 169 yards, 3 TDs), led a scoring drive on the Bobcats second possession, capping the series with a 14-yard score to John Israel-Cooper (first collegiate score) as STU was up 7-0 in less than three minutes.
Two drives later, the ground game of the Bobcats led to a touchdown. Robert Armes (26/195, TD) took four straight carries for a combined 38 yards before UC called a timeout. James Micionifollowed the timeout with a 33-yard strike to Israel-Cooper to put STU in the red zone. A seven-yard scamper from Cedric Tucker (first collegiate touchdown) extended the lead to 14-0 in favor of the Bobcats.
Union began the second quarter of play with the ball and looked to gain some offensive momentum, the Bulldogs cut the STU lead in half, 14-7, with a 12-yard touchdown pass. UC once again added a touchdown, scoring with less than two minutes in the first half, but rather than tying the game at 14-14, STU Defensive back, David Crawford blocked the point after attempt to preserve the Bobcat lead at 14-13.
The St. Thomas defense began the second half on the field, clinging to a slim one-point advantage. A three-and-out brought Bulldog punter, Seth Burke onto the field, Kobe Panierblocked the punt and Keiondre Gaulden "scooped and scored", returning the blocked punt 20-yards for the first defensive touchdown in STU history and giving St. Thomas a 21-13 lead.
Midway through the third quarter, the Bobcats began their drive deep within their territory on the 11-yard line. On third-and-eight, Sepulveda found Israel-Cooper once again and Israel-Cooper's speed took care of the rest, burning the Bulldogs defense with an 87-yard touchdown for his second TD reception of the afternoon.
Billy McConnell added his first career collegiate field goal, from 33-yards, to push the Bobcat lead to 31-13 as the final quarter approached.
A 14-yard Bulldog touchdown put the game at a two-score contest, early in the fourth quarter with STU leading 31-20.
The St. Thomas defense sensed their first victory and stepped up to make an important play once again. Jhaqwori Austin intercepted a pass to get the STU offense possession at midfield with an opportunity to seal the victory. Sepulveda connected with D'amaunte Oliver from 12-yards, for his third touchdown of the game and put STU ahead 38-20.
Armes, the man responsible for the programs first touchdown, found pay dirt once again to officially record the programs first win, as the running back finished his day with a 36-yard rushing touchdown to give the Bobcats a 45-20 lead with less than five minutes remaining.
Darian Hernandez and the STU defense, put the proverbial "icing on the cake" ending any Union hopes of a drastic comeback with yet another interception, the fourth of the game.
MVBobcats
Jordan Sepulveda: 8/18, 169 yards, three touchdowns
Robert Armes: 26 carries 195 yards, touchdown
John Israel-Cooper: three catches, 134 yards, two touchdowns
Dametrius Love/Shariff Rodriguez: 10 tackles, each
Michael Torrence: three sacks
St. Thomas (1-1) returns home to play Point University (Ga.) on Saturday, September 21 at St. Thomas Aquinas High School in Ft. Lauderdale as part of "Broward County Appreciation Day" with kick-off scheduled for 12:00 p.m.
Posted by Greg Cielec at 12:09 PM No comments: 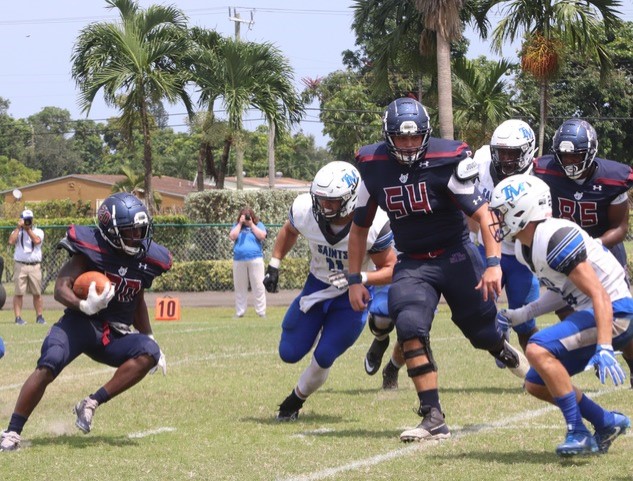 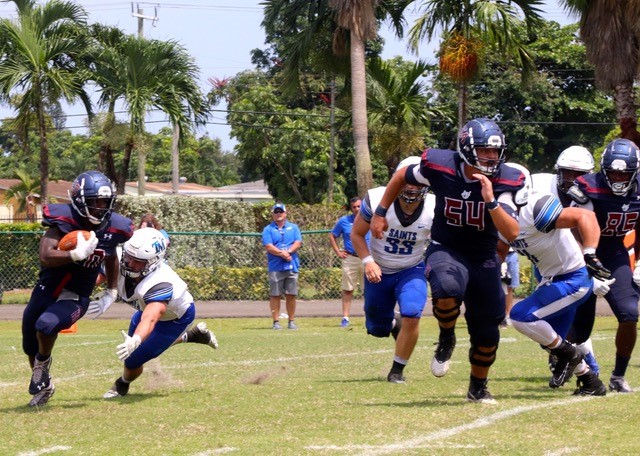 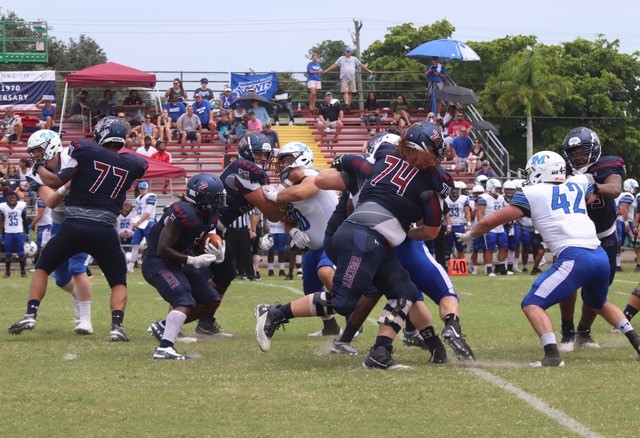 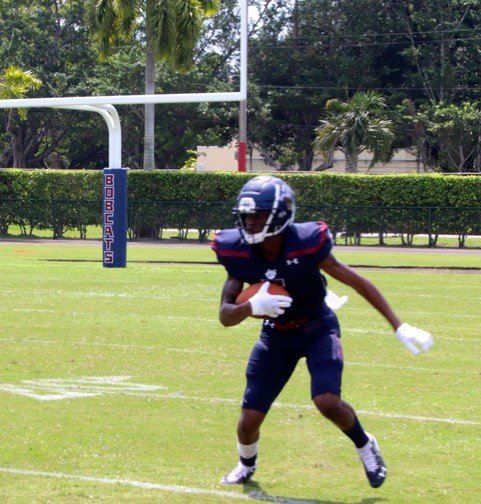 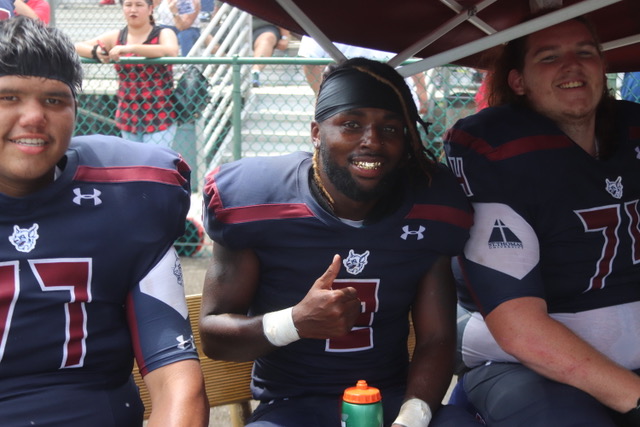 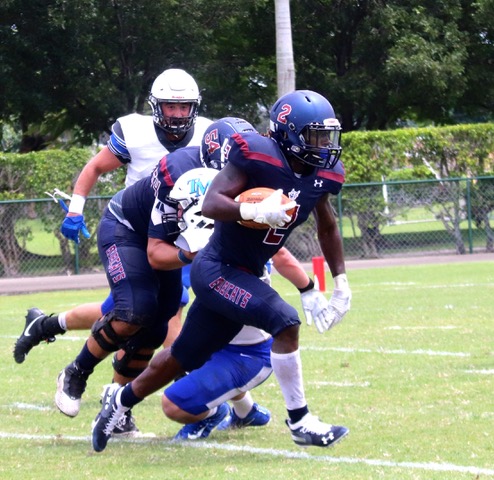 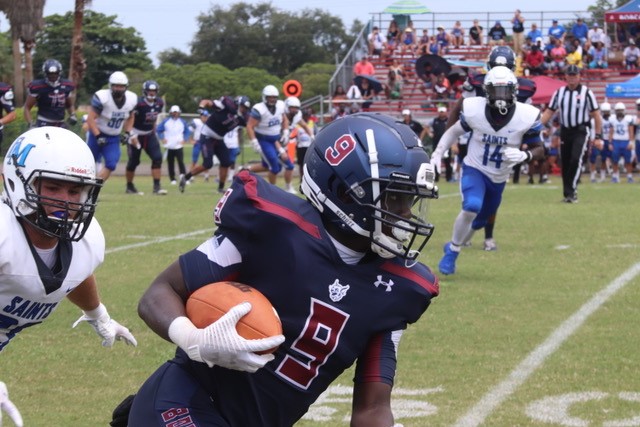 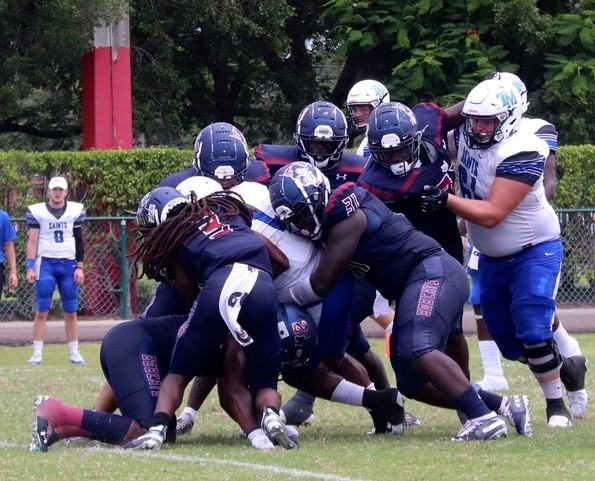 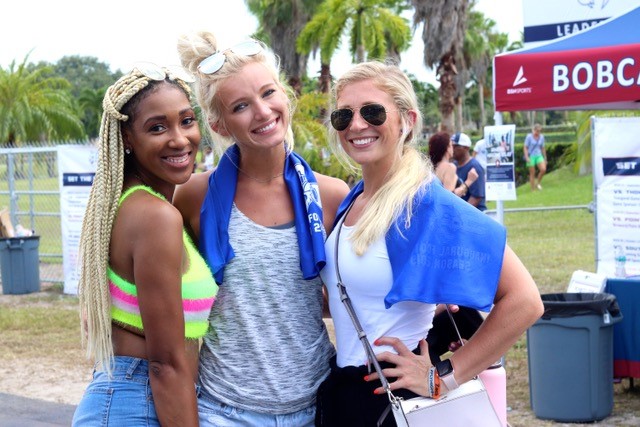 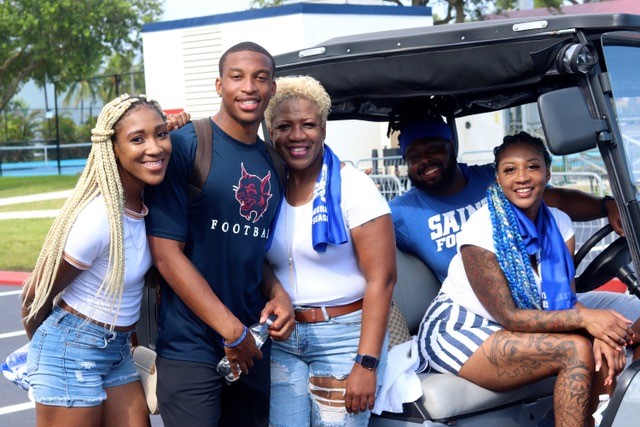 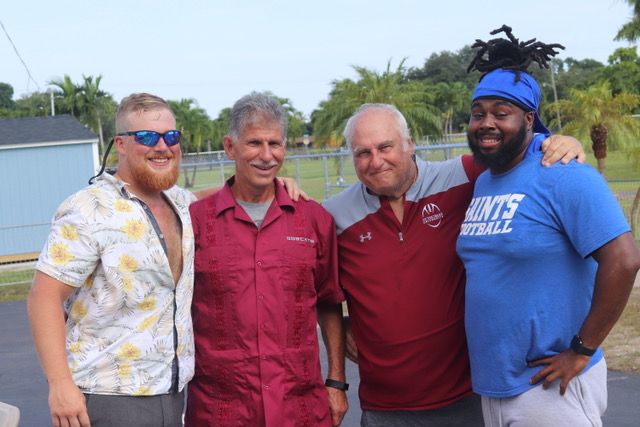 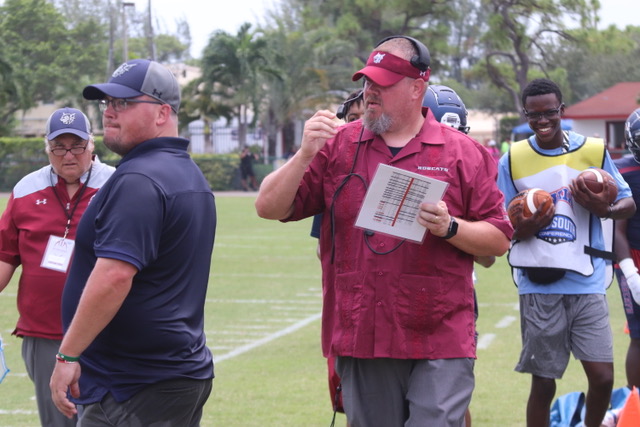 Next Game:
at Union College (Ky.)
9/14/2019 | 12 p.m.
MIAMI GARDENS, Fla. (September 7th, 2019) - Saturday, September 7; a day that will be long remembered by generations of St. Thomas University administration, students, faculty and alumni, for the first time in school history, Bobcat Football was played.
12 p.m. marked the beginning of a new era, at St. Thomas, the kick-off from Thomas More kicker, Alexander Haley, and return by David Crawford, signified the start of STU Football as the Bobcats began the day, the season and the program on the offensive. STU wasted little time recording the first "first down" in program history, as running back, Robert Armes, took his first collegiate carry six yards following a James Sepulveda completion to D'Amaunte Oliver.
The young defensive unit of the Bobcats made their presence felt on the Saints, holding a highly touted offense to -2 yards on TMU's first offensive possession, Jayson Contreras led the way with the first-ever Quarterback sack in school history. St. Thomas second drive lasted four plays, before punting to Thomas More and allowing a 46-yard return as the Saints passed the 50-yard line for the first time in the game. Four plays later, TMU put the ball in the end zone for the first score of the game, with Dillon Powell scampering from six yards out. As the first quarter wound down, a tipped pass and subsequent interception was returned for a pick-six, as TMU took a two score lead at 14-0.
Following the first quarter, St. Thomas University honored the Miami Dolphins as the first-ever "Bobcat Community Award" recipients for their efforts in the Miami Gardens community and in bringing football back to the campus of St. Thomas.
Midway through the second quarter, Thomas More added a third touchdown, Mitchell Hogue scored from four yards out to put the Saints ahead, 21-0. St. Thomas ran eight more plays, over two drives, before halftime but gave TMU possession with 2:30 remaining in the first half. TMU finished the first half by knocking in a field goal from 19-yards to head into the break with Thomas More leading 24-0.
Head Coach Bill Ryhcel and staff went into their first halftime at St. Thomas and made the necessary adjustments to get STU back into the game. Defensive Coordinator, Alex Gray's unit forced the Saints into a quick three-and-out, allowing only nine yards, on the first TMU drive of the second half. Sepulveda led the offense down the field with 48 passing yards, including a huge play for 31 yards to John Israel Cooper to put St. Thomas into the red-zone for the first time in the game. One play later, history was made, Armes ran for 12-yards, breaking a couple tackles in the process to find the end-zone and recording the first ever St. Thomas University Bobcats touchdown. Billy McConnelladded the first extra point in school history to complete the touchdown. Thomas More quickly responded with a rushing touchdown of their own, extending their lead to 31-7.
Heading into the final quarter of play, STU needed positive momentum on their side and linebacker, Wendy Francoisobliged. Francois forced a fumble on the Thomas More 40-yard line and gave the Bobcats the ball in positive field position. Sepulveda led his second scoring drive of the afternoon, capping it off with a five-yard touchdown pass (the first passing/receiving touchdown) in school history to Oliver to put the game at 31-14, following a McConnell extra point.
Thomas More sealed the win with their third rushing touchdown of the day with 3:15 remaining in the game.
Overall, St. Thomas ran 70-plays for 282 total yards, finished with 13 first downs and 29:27 of possession time in the first game in the program's history.
Bobcat Leaders
Robert Armes: 20 carries, 97 yards (4.85 yards-per-carry) first touchdown in St. Thomas history
Jordan Sepulveda: 26-37, 1 TD/1 int, first passing touchdown in St. Thomas history
D'Amaunte Oliver: five catches, 25 yards, first receiving touchdown in St. Thomas history
Upcoming
St. Thomas will play the program's first road game on Saturday, September 14th, traveling to Barbourville, Kentucky to play Union College.