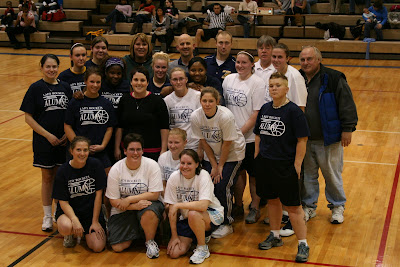 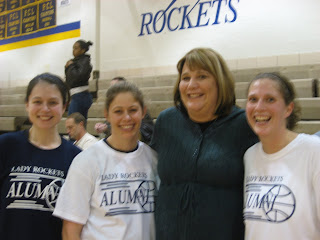 Thanks to everyone who came to or contributed to the first ever Streetsboro High School Girls Basketball Alumni game, which raised over $1300 for former Rockets hoopster Amy Rhinehart Ramba '99 and her battle against breast cancer. Pictured from the Greg Cielec era of 'Boro hoops are Nikke Lee '99 (a graduate of Ohio Wesleyan University and currently a book editor and writer), Polly Deirkens '97 (a University of Toledo graduate and currently Streetsboro's journalism teacher), former Assistant Coach Coni French (expecting her first child in April!), and Christine Flick (a graduate of University of Akron, a mother of four, and a medical engineer at the Cleveland Clinic).
Posted by Greg Cielec at 2:51 PM No comments:

Back in the 70's when they were a really bad team, the Cleveland Indians every so often we sign a once great player who was past his prime, hoping to squeeze one more good season out of him. But instead of witnessing one more landmark year out of a once great player, Tribe fans had to watch a painfully sad ending to an otherwise stellar career.
I thought of that during last Friday's Leon Russell show. I have been a big fan of his going back to middle school when I bought my first records and his collaborations with George Harrison and Joe Cocker. I have seen him perform six or seven time since them, and all of them were good shows that featured Russell's great compositions and his keyboard expertise.
But watching him last Friday at the Beachland was painful. Maybe he was showing his age, maybe it was the weather, and maybe it was the fact he is in the middle of a winter tour through the north. I don't know. In the past it was about him and his keyboard playing and singing his own compositions. Last Friday he was a part of a bigger band that played mostly covers. I counted four Stones songs, and more than a few blues and rock standards like "Come Into my Kitchen" and "Hoochie Coochie Man." Thrown in between them were a few Russell classics like "Back to the Island" and "Lady Blue," but their guitar dominated arrangements made them sound a little too much like everything else they were playing.
Leon Russell deserves to be in the Rock Hall, from Mad Dogs and Englishmen and the Concert for Bangladesh to his solo career and his body of work as a songwriter. But what the full house of fans saw last Friday was just a mere shadow of what he once was. I hope it was just an off night and he still has something left.
Local rockers Oliver Buck and the New Madrids were the opening band and they were very impressive, playing straight ahead guitar driven roots rock featuring their own compositions. Amongst the highlights were "Milwaukee" and the closer "Home to You." Their current album is "Prodigal Son." They have a bunch of near by shows coming up, check them out at www.oliverbuck.com.
Posted by Greg Cielec at 4:16 PM No comments: 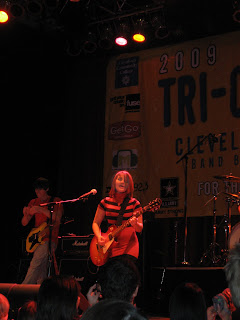 Before I headed out to the Beachland for last Friday's Leon Russell show, I stopped at the House of Blues to catch some of the bands in this year's 13th High School Rockoff. I am so glad I did. I worry about rock and roll, the music I grew up with back in the 60s, 70s, and 80s, sometimes I think its on the verge of extinction. The kids at the Rock Off proofed me otherwise. In this world dominated by American Idol, Clear Channel country, and where almost every genre of commercial popular music sounds the same, it was so good to see talented young people playing real rock and roll, with guitars and drums and songs that they have written themselves.
I caught a half dozen of the bands and they all deserved 'A' for effort. Sink Ohio Sink, Deviathan, and ESD all had a hard edge, showing influences from Gwar to Metalica to Mushroomhead. Pending Approval played a straight ahead rock, with both an edge and a melody. Standing on Friday showed that they had spent sometime listening to their parent's Neil Young and Tom Petty albums. Red Reign featured a pint sized Pat Benatar clone named Desiree Boardwine who got the audience jumping and screaming along to her original songs. All of the bands showed that they had put in hours of practice time, and both Red Reign and ESD made the cut to the finals on January 30.
The Rock Off continues next weekend with bands playing both Friday and Saturday, with the finals the following Friday. Check out the performance schedule at www.cleveland.com/music/rockoff. And, as always, there are a lot of great things going on at the House of Blues, check them out at www.hob.com/venues/clubvenues/cleveland/.
Posted by Greg Cielec at 4:12 PM No comments: