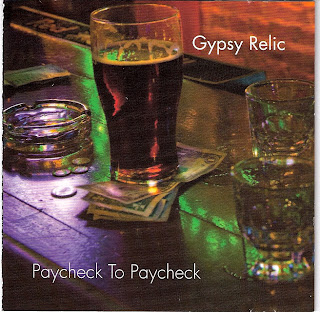 A pleasant surprise was receiving a promo copy of local rockers Gypsy Relic's first full length CD release "Paycheck to Paycheck." The band's name for some reason gave me visions of eighties metal, which I'm not a huge fane of, but I was quite surprised when I finally got it into the CD player.
Gypsy Relic is a three piece outfit made up of Dann Jasko on guitar and vocals, Brad Thompson on bass, and Chris Szuch on drums. They play all original music, blue collar rock and roll with a touch of jazz and a bit of hip hop. Bands with this line up are immediately compared to Cream, or local favorites the James Gang and Glass Harp. Those are some pretty tough comparisons, but these guys can hold their own. "Pink Hair and Polka Dot Shoes" is a great song, and "If You Leave Me Here Again," "Home," and May Never" aren't that far behind. Jasko is solid on guitar, and Thompson and Szuch give him a strong bass line to keep things moving forward.
The band has some shows coming up, including before and after the Tribe game on June 27 at Wilbert's. I'm anxious to see if they are as strong live as they are on this disc. For more information visit www.GypsyRelic.com.
Posted by Greg Cielec at 1:26 PM No comments: 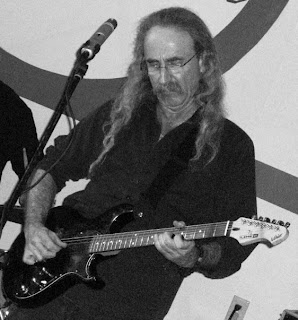 Jonah Koslen brought his latest project to the Winchester in Lakewood last Saturday night, a night of classic rock featuring all the songs off the 1977 MSB album Stage Pass, as well as some other old gems from Koslen's career with both MSB and Breathless.
This time around Koslen brought with him a veteran crew of local and regional musicians including Donny Thompson on drums, former Beau Coup member Bill March sharing guitar and vocals, Rik Willinger on keyboards and a variety of other things, and former Easy Streeter Van Eidum on drums.
I wasn't sure the concept for the evening, playing all the songs from Stage Pass in the order they appeared, without the rest of the original principals was going to work. But, for the most part it did. Koslen did most of the vocals, but everyone else pitched in a song or two, the musicianship was solid, and the strength of the songs overshadowed any rough spots.
Amongst the highlights were the Koslen originals "Nothings Gonna Change My Mind" (which the band did twice, the second time as the last encore); "Waste a Little Time on Me," and, of course, the album's closer "Strike Up the Band." His guitar work also shined on "Calcutta Auction," "Moving Right Along," and "Let's Get the Show on the Road." Bill March did a good job filling in for Michael Stanley on a few of the vocals, and Willinger did more than a fine job with the Daniel Pecchio flute solo that opens "Moving Right Along."
The band also through in a few Koslen tunes from early MSB albums, including "Angel Eyes," "Blue Jean Boy," and "Ladies Choice." The encore included the Breathless standards "Walk Right In" and "Taking It Back." The almost capaicity crowd of forty and fifty somethings really enjoyed the evening.
Before he heads up to the islands this summer to do his one man band thing, Koslen with this line up will be doing several more Stage Pass shows in the area. Go to www.jonahkoslen.com for more info.
It had been a while since I had been to the Winchester, but every time I do I see improvements in the club. They've redone the bathrooms, and the walls in the front bar are getting filled with some great photos of some of the performers who have graced their stage. Keep up the good work! As always, they have a lot of good things coming up, including Nashville singer/songwriter Darrell Scott on April 24; blues diva Kristine Jackson on May 1; the Sultans of Bing on May 2; Vambo Rools, a Alex Harvey Tribute band, on May 9; and the legendary Shawn Phillips on May 23. Visit www.winchester.net for more information.
The photo at left is courtesy of www.JonahKoslen.com
Posted by Greg Cielec at 1:25 PM No comments:

The Lady With All the Answers, the Cleveland Play House, 1 April 2009

The Lady With All the Answers, a one-woman show starring Mimi Kennedy, is currently playing at the Cleveland Play House until April 19. The very entertaining play tells the story of columnist Ann Landers, and is a very good look at not only her life but her rivalry with her twin sister (Dear Abbey for those who don't know); her own marriage which ended after over thirty years when her husband left her for a younger woman; and the times she lived and wrote.
Mimi Kennedy is outstanding, as she runs around the stage telling story after story, as well as a fair amount of inter action with the audience. She shares laughs and tears, as well as Ann Landers' opinions on topics such as the women's movement, gun control, and the war in Vietnam. Among the best stories are when Ms. Landers appeared on a talk show with Linda Lovelace, and her commentary on politicians of the time period like Lyndon Johnson, Hubert Humphrey, and Richard Nixon.
This is a great piece of theater and I highly recommend it, especially for those of us who lived during the time when everyone did read Ann Landers.
The Play House will be wrapping up their season with a production of Thornton Wilder's Heaven's My Destination in the Drury Theater from April 24 until May 17, and their third annual FusionFest from April 29 until May 10. This year you can buy a $99 FusionFest pass that is good for all events and parking. Call 216.795.7000 ext. 4 for more information.
It has been another very good season at the Play House, and it is not too late to spend an enjoyable night of theater there before it is over. For more information check out www.clevelandplayhouse.com.
Posted by Greg Cielec at 4:09 PM No comments: