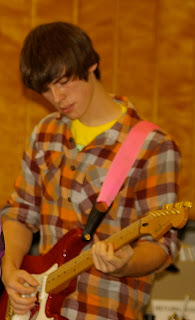 Below is my article about the Tri C Rock Off, Cleveland's annual battle of the bands for high school musicians, that first appeared in the January 20 edition of CoolCleveland.com. Pictured here is Streetsboro High guitar virtuoso Brian Poston who played in four bands at this year's Rock Off.


It is January and that means it is time for one of the great annual musical events here in Northern Ohio, the Tri-C Rock Off. Now in it's fourteenth year, the event lets local high school musicians and their bands have a moment of glory or two on the big stage at the House of Blues.
It is a three-step process to win the Rock Off. First, hundreds of bands submit videos and CDs to be picked to perform at the HOB. Sixty-six bands are then selected to perform twenty-minute sets over three weekends. Three bands from each night are invited back on February 6 to perform again, with a champion and several runner-ups chosen.
The bands that get selected to play at the House of Blues are good. They show talent, imagination, and the results of a lot of hard work and practice. During their sets most bands perform several original songs and one cover. Even with 10-13 bands playing a night, things run pretty smoothly as the HOB sound and stage crews keep things moving, with very little down time.
I've been to the Rock Off on and off for years, and I think for most of the bands it’s the chance to perform on a big stage in front of their families and friends which is a bigger deal than actually winning the whole thing.
The first nights of performances were January 8 and 9, with more sets coming on Saturday, January 23; Sunday, January 24; Friday, January 29; and Saturday, January 30. The finals will be at 3:00 P.M. on Sunday, February 6. For more information and a performance schedule of bands visit the website www.cleveland.com/rockoff.
For some of the performers it's a once in a lifetime thing, but for others it's hopefully a stepping-stone to greater things. Brain Poston, an 18-year-old senior at Streetsboro High School, is in his second Rock Off, this year playing with four different bands (Project Rock Star, Steffani Reeder, Maddie Finn, and Shane Stokes). "Last year it was awesome, the best experience of my life. But I was really nervous," he says. This year it's different for the lead guitarist. "I'm a vet, last year we made it to the finals. I'm not nearly as nervous, I'm going to have fun."
Brian is one of those who is looking for a future in music. "Very soon I travel to the Berkeley School of music in Boston to audition. Just me and my guitar and a round trip plain ticket," he says with a confident smile. "If that doesn't work out I'll study music at a local college. As for now, I'm playing out somewhere every weekend, and practicing with someone every weeknight."
I checked out some of the opening night bands, and as always, the talent was impressive. I saw a band from Chagrin Falls and Kenston called Kid Brother who had a great 90's indie rock sound to them. They did a song called "She's Hot" that had a great opening bass line from Amph Fritz and got the audience up and jumping. Yield on Mars hails from Bay Village, and they were definitely influenced by their parents Led Zeppelin and Pink Floyd albums, and featured some great guitar work and drummer Jeremy Guffin on vocals. Project Pop Star is a coed project from Streetsboro High School that had a bit of theatrics and a lot of jump to them. There was plenty of big beats and some slick guitar work from Brian Poston. Near Forget Tomorrow features kids from Lake Catholic and Painesville Riverside, and had a sound reminiscent of Pat Benatar and the GoGo's. ESD returned for the second year in a row, and featured almost all instrumentals, and some great guitar work led by Tim Vopat. Selling You short was another guitar driven band with players from St. Ignatius and St. Ed's, who gave a very polished set.
Who's going to be the next Raspberries? MSB? Mushroomhead? Black Keys? You have a chance to check that out over the next several weekends at the House of Blues for the 14th Annual Tri C Rock Off.
Posted by Greg Cielec at 6:33 PM No comments: 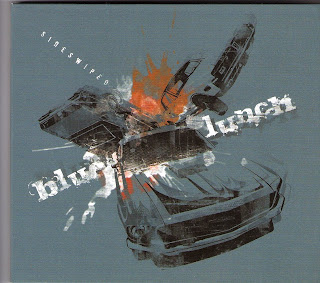 The guys in Blue Lunch have been playing the blues so long, either individually or as group, that their live shows almost become a lesson in blues music, showing influences from Chicago, New Orleans, Soul, 50's Rock and Roll, and everything in between. Their fifth release on Wilberts Records Sideswiped does the same thing, with fifteen solid tracks featuring Blue Lunch's many styles and talents.
The disc includes seven originals and eight covers. Bob Frank, Pete London and company have you up and dancing on almost every track. The best of the originals include the title track, a great Memphis sound number; "All Things to Come," one of their favorite live tunes; and "Don't Point that Thing at Me." Amongst the covers are the R & B classic "Everyday will be Like a Holiday," with great four part harmony on the chorus; and the album's closer, a rowdy version of Doc Pomus's "Too Much Boogie."
Blue Lunch is Frank on guitar and vocals, London on harmonica and vocals, Raymond DeForest on bass, Scott Flowers on drums, Mike Sands on piano, Keith McKelley on tenor, Bob Michael on trombone, and Mike Rubin on trumpet. The guest list for Sideswiped is a who's who of the blues, including a couple of great sax solos by Boston's "Sax" Gordon Beadle.
Blue Lunch is going to be quite busy in the next several months, including a trip January 20-24 to the International Blues Challenge in Memphis, Tennessee. They come home to play the House of Swing on January 29 and Fat Fish Blue on January 30. For a complete schedule of show dates, and for more information about Blue Lunch, go to www.bluelunch.com.
I highly recommend Blue Lunch's new release Sideswiped, it’s a great piece of music from some local guys who really know how to do it.
Posted by Greg Cielec at 6:29 PM No comments:

Alejandro Escovedo is one of those recording artists I have always heard great things about from friends whose musical tastes I respect. He's one of those singer/songwriters who has been around forever crossing over into several genres, but has never reached what the general public would call superstar status. Often compared to everyone from Santana to Springsteen to the Rolling Stones, he brought a four-piece band to the Beachland last Wednesday. It was my first chance to see him, and I will probably never miss him when he comes through town again.
He and his band performed a twelve-song set followed by an encore of four songs. Most of the songs were autobiographical upbeat rockers, and featured some terrific guitar work. Songs with titles like "Wasn't I Always a Friend to You," "The Bed is Getting Crowded," "Sister of Lost Soul," touched on the themes of romance, family, and traveling the road. He wears his emotions on his shirtsleeve and in the songs that he writes and performs. It was wonderful stuff. One of the new songs "After the Meteor Shower" opened with this line, "She was pretty as a star/take a photo please." He is a very good songwriter.
The show's closer "Castanets" had more than a little Chuck Berry beat and guitar to it. His final two encores where the only covers of the evening, rowdy versions of "All the Young Dudes" and "Beast of Burden." The Beachland was almost filled to capacity with both Escovedo and serious music fans, most seemed to enjoy the show tremendously.
For more about Alejandro Escovedo and his music, including his new release "Real Animal," which is available on CD and vinyl, go to www.alejandroescovedo.com. As always, there are a lot of great shows coming up at the Beachland including Ronnie Spector on June 22; local rockers Cats on holiday doing a benefit on January 23; the Deanna Bogart Band on February 4; the subdudes on March 19; and the Paul Thorn Band on March 25. Fore information on these shows and more visit www.beachlandballroom.com.
Posted by Greg Cielec at 6:28 PM No comments:

Lost in Yonkers at the Cleveland Play House

A terrific story and near perfect casting make for a wonderful night of theater at the Cleveland Play House with their current production of Neil Simon's Lost in Yonkers. Directed by the Play House's Artistic Director Michael Bloom, the play is running until January 31 in the Drury Theater.
Simon's autobiographical play was first performed in 1991 and won the Pulitzer Prize for drama. The story revolves around a young widower; his two sons; and their uncle, aunt, and grandmother facing the hardships of World War II at home. The father is forced to go on the road to work to help pay off his deceased wife's hospital bills. The boys are forced to live with their strict German immigrant grandmother and their mentally impaired Aunt Bella. Also showing up is their Uncle Louie, a shady character who also has some issues of his own.
The whole play takes place in the living room of their home in Yonkers, above the candy store that is the family's source of income. There are many humorous and touching moments, as the young boys survive ten months living without their father.
Alex Wyse and Maxwell Beer are very good as the two young boys Jay and Arty. Sara Surrey does an outstanding job as Bella their aunt. Broadway performer and star of television's As the World Turns Rosemary Prinz steals almost every scene she is in as the elderly German Jewish grandmother.
Coming up next at the Play House is Fats Waller's Ain't Misbehavin' from January 29 to February 21; An adaptation of the Jane Austin novel Emma from February 26 to March 21; and Bill W. and Dr. Bob, a drama based on the lives of the two men who founded Alcoholics Anonymous, from April 9 to May 2. For information on these shows, and all the other great things happening at the Cleveland Play House visit www.ClevelandPlayhouse.com.
Posted by Greg Cielec at 6:25 PM No comments: