The Long Road, a group of long established local folk singers and musicians, put on a very enjoyable show of acoustical music to an almost capacity crowd on a cold and snowy Sunday night last week at Nighttown. The group lead by singer/guitarist/songwriter (and sometimes CoolCleveland contributor) David Budin played a 19-song set that included folk and rock favorites, several obscure gems, as well as a few ageless standards.
The six-piece band is made of all strings, including a variety of guitars, harps, and mandolins; a pedal steel, and an upright bass. Almost everyone took a turn at lead vocals, backed by beautiful harmonies and fine musicianship. The mostly gray haired audience definitely enjoyed it.
The players in the Long Road go back many years together and separately, and all have impressive musical histories. Budin goes back to the late 60's and the local folk scene around the legendary La Cave club, and spent time in the New York City music scene in the 1970's. Bassist Ray Deforest has played with a who's who of Cleveland musicians over the last thirty years, performing everything under the folk, rock, jazz, and blues umbrellas. Charlie and Celia Hollander Lewis often perform as a folk and bluegrass duo based in Athens, Ohio. Kevin Richards amongst many things is the founder of both the Fairmont School of Music and the Roots of American Music program. Robert Sandham is another long time local folk musician who has worked with John Bassette and Alex Bevan. He is also currently a church pastor. Together they make wonderful music.
The song list featured songs from many different eras, genres, and even nationalities. Amongst the highlights were the opener "Try and Catch the Wind"; Bob Dylan's "I'll Be Your Baby Tonight" with some fancy country guitar playing; a haunting version of Nanci Griffith's "Gulf Coast Highway" with Celia and Charlie Lewis doing the vocals; and an equally haunting version of John Keelaghan's "Cold Missouri Waters" about a 1949 wildfire in Montana. Amongst the surprises were acoustic versions of the rock standards "The Letter" and "Strange Brew." My favorite song of the evening was their version of Marty Robbins' El Paso," with Charlie Lewis on lead vocal and almost everyone adding some sort of string solo along the way.
While strings were being tuned and guitars were being changed between songs, Budin kept the show going with short little monologues on everything from musical history to current events. His soliloquy on cheese that cost $19 a pound at the Whole Foods Grocery Store was exceptionally entertaining.
The Long Road has at least four, and maybe a few more, shows planned for 2009, including two events at Cain Park this summer. For more about the Long Road check out www.longroadsongs.com.
It is good to see other genres of music being booked into Nighttown besides jazz. The room was perfect for a night of acoustical music from the Long Road. As always Nighttown has a lot of great shows coming up, check them out at www.nighttowncleveland.com. Amongst the upcoming highlights are Cleveland born trumpeter Dominic Farinacci returning with his quintet the weekend of March 6 & 7; Nashville jazz vocalist making her Nighttown debut on March 12; and the Hot club of Detroit returning on March 26.
Posted by Greg Cielec at 10:40 AM No comments: 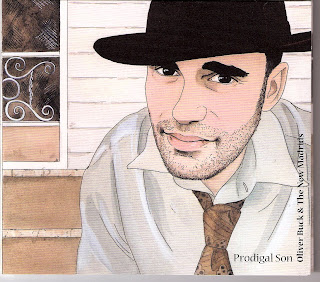 Oliver Buck calls his second release Prodigal Son a road album, about the journey of moving back to Cleveland after fifteen years in other places, the last five in Kansas, trying to make a living playing music. And the thirteen songs on the album all stick to that theme, with titles like “Autumn in Kansas,” “Gina from Tulsa,” and “County Jail Blues.”

“Prodigal Son” is a great stuff. Buck writes wonderful songs and offers them up in a simple and straight ahead fashion with his honest voice backed by nothing more than guitar, bass, and drum. Recorded the old fashion way on analog tape with no computers or digital effects, it has the feel of a John Prine or Johnny Cash record.

There are more than a few standout cuts, including the title track, “Once Around the Sun,” Milwaukee,” and “The Troubadour Life.” Also included is a very respectable cover of Bill Monroe’s “Sitting on Top of the World.”

For a schedule of performances by Oliver Buck, both solo and with the New Madrids (bassist Adam Rich and drummer Ernie Richmann) visit OliverBuck.com. I think this guy is really good, I hope things go well for him in his return to Northern Ohio.
Posted by Greg Cielec at 6:14 AM No comments: