Another local kid made good returned to Nighttown last week, as vocalist Rhys Miller entertained a crowd of friends, family, fans, and jazz lovers last Tuesday night. Backed by a talented band led by pianist Jackie Warren, Miller performed two sets of standards and personal favorites, helped along the way with same guest appearances by some old friends.
Amongst the classics Miller tackled were "Being in Love," "Quiet Nights Loving You," "Angel Eyes," "A Night in Tunisia," and "A Day in the Life of a Fool." More contemporary material included a slow, jazz arrangement of The Police's "Roxanne," and a similar arrangement of U2's "Still Haven't Found What I'm Looking for."
Miller is a large man with a beautiful voice, with more than a little Billy Eckstine, and a touch of Sam Cooke, in it. His band at Nighttown included not only Jackie Warren on piano, but also Sammy DeLeon on percussion, Kim Reed on bass, and Ron Godale on drums. He was joined several times over the course of the evening by some old friends who are in the oldies band Generation Gap, guitarist Dave Schock and vocalist Julie Fogel, joined Miller in a very good version of James Taylor's "Her Town Too."
I really enjoyed the show, and I think the rest of the audience did too.
For more about Rhys Miller and his music, he plans to return to Nighttown later in the summer, check out www.myspace.com/rhysmillermusic. As always, there are a lot of good things coming up at Nighttown, including organist Tony Monaco and his trio on May 28; Irish vocalist Moya Brennan on June 3; and the great guitarist Duke Robillard on June 20. Visit www.nighttowncleveland.com for more information.
Posted by Greg Cielec at 4:59 AM No comments: 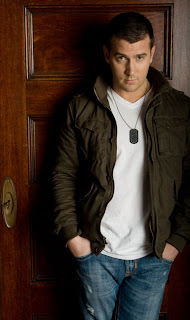 
Ritz's music influences stretch from the classic rock days of Billy Joel and Tom Petty, to current artists like Matthews. Performing with just an acoustical guitar he put on a show that started good, and got better as it went along. Much of his music could be called love songs for twentysomethings -- for that time in life after high school and after college, but when life is still filled with a lot of insecurity and fear of the future. His songwriting shows he is a pretty good observer of post-college life in 2009.


"Whiskey and Wine" is a signature tune from his Genuine Son days, although it sounded good solo probably doesn't get its total affect without a full band. "Eddie Casino," another catchy tune, probably needed a full band behind it also. "Scars of Money" was the best song of the evening, and "The Joker's Mine" had a bit of Paul Simon during his Graceland period funk to it. The closer was "Goodbye," which told of an end of a summer romance.


Ritz was comfortable and affable on stage, and although looking quite youthful you can sense he's been around a bit. He's currently working on a release called Smoke with his new band, The Riders. You can learn more about Smoke, Ritz and his band by checking out http://www.DaveRitzMusic.com.


Here's hoping we see and hear more of him around town in the near future... and with a full band backing him up.


Wilbert's has a fundraiser coming up for the Cleveland Blues Society on Sunday, May 24, featuring Madison Crawl, Crazy Marvin, and the Real Deal Blues Band. For information about all Wilbert's shows check out http://www.WilbertsMusic.com.
Posted by Greg Cielec at 7:24 AM No comments: