Geezeroo 4 at the House of Blues

I wrote a preview of this year's Geezeroo concert at the House of Blues Cleveland on Sunday, September 27, for CoolCleveland.com.
Check out the article at:
www.coolcleveland.com/index.php/Main/Geezer09
Posted by Greg Cielec at 7:41 AM No comments: 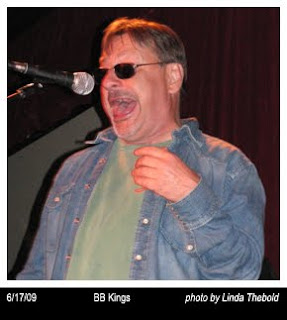 When Southside Johnny and the Asbury Jukes play in Cleveland the shows are always the same. He opens with three or four songs from his usual set. A couple of new tunes, maybe an old blues standard, and then a Jukes classic or two. But in Cleveland that usually lasts only three or four songs, then the set list is thrown away, and it becomes 1980 again when the Jukes were as big as anybody here in Northern Ohio.

Last Friday at the House of Blues they didn't even wait until the fourth song. He opened with "This Time is Real" and did not stop until the final encore "Hearts of Stone."

The sold out crowd of forty and fifty something's loved every minute of it, as Southside backed by a nine piece band played one classic Jukes song after another, including "Love on the Wrong Side of Town" (which they did twice), "Walk Away Renee," Talk to Me," and "I Don't Want to go Home." Amongst the highlights were "Anxious" and "On the Beach" from his Mercury albums of the mid 80's, and a great cover of J.Giels Band's "Looking for Love,."

The band also turned their long time encore "We're Havin' a Party," into a medley of 60's rockers, including "Can I Get a Witness," "Hanky Panky", and "Be My Baby."

Southside and the Jukes will resurface in Cleveland soon, they always do. You can check out their schedule on www.southsidejohnny.com.

As always there are a lot of great shows coming up at the House of Blues including Alice in Chains on September 16 and the great B.B. King on October 9. Go to www.hob.com for the complete schedule from now until the holidays.

A special event of note at the House of Blues is Geezeroo 4 on Sunday September 27 featuring three original members of Return to Forever, Chick Corea, Stanley Clarke, and Lenny White. The evening is a fundraiser for the Human Fund, which supports the arts in Cleveland Public Schools. For more information go to http://www.the-human-fund.org.

The above picture is courtesy of www.southsidejohnny.com.
Posted by Greg Cielec at 7:13 AM No comments: