I am still writing for the Orange and Brown Report, a must read for all Cleveland sports fans (even for as painful as that can be at times!). The magazine is free when you sign up for amembership for scout.com's website services, which are the best in sports and is now in partnership with Fox Sports.

Get inside the world of Cleveland Football

This Magazine is INCLUDED with your Annual Pass! Annual Pass
7-Day Free Trial
Only $109.95 for a full year:

Below is an article I wrote several months ago for the OBR on the Wildcat offense.

The Wildcat Formation
As last season in the NFL was winding down, one thing you were hearing about more and more was the "Wildcat" formation, which the Miami Dolphins, amongst several teams, had success with. This year there was a buzz about it in training camps, and it will be interesting to see if it becomes more popular this season.
The Wildcat formation has been around forever, formerly known as the single wing. Over the years it has had many variations, and there is no one single wing formation or offense. It was the offense of the 30's, 40's, and into the 50's when the T-formation became the most popular offense. Paul Brown had as much to do with the demise of the single wing in the NFL as anyone else, as his Browns teams in the late 40's and early 50's ushered in the modern offense with its passing game, screen plays and draws, and power running game featuring a fast fullback.
The Wildcat includes, as did previous incarnations of the single wing, a shot gun snap to a tailback who could run or throw. It includes the use of other backs for quick handoffs, blocking, and reverses; and also features a short passing game. It is very similar to the spread offense run by many colleges and high schools today.
The Dolphins ran four basic plays out of the Wildcat formation last year: a tailback power sweep, a halfback dive, a play action pass off the power sweep, and a reverse also off the power sweep. The Browns did similar things with Josh Cribbs at quarterback last year, especially after Derrick Anderson and Brady Quinn went down. The Browns did not have the success with it that the Dolphins had.

In the NFL the Wildcat has become a change of pace offense. It is different enough from the traditional pro offense that if a team is not prepared for it they can be hurt by it. There are enough offensive players on the pro squads with spread offense backgrounds to make various single wing sets and plays possible.
However, the Wildcat will never become any NFL team’s base offense for three reasons. The first is that in the NFL you have to attack the whole field, including both the line of scrimmage and passing on multiple levels down field. The Dolphins did a good job sneaking up on teams by using the Wildcat last year, but this year teams will be ready for it. When defenses see it this year they will bring more defenders close to the line of scrimmage, and make sure the tailback gets hit every play.
The second reason is the cost of quarterbacks. The tailback in the single wing just gets beaten up by taking too many hits. And once every defensive coordinator comes up with his Wildcat package, the surprise feature will be gone. Quarterbacks are paid millions of dollars to throw touchdown passes, not to run the ball or to get beat up playing tail back in the single wing.
The third reason I feel the Wildcat will not become a mainstream offense in the NFL is the fans don't want it. The fundamental difference between the pro and college game over the last forty years is that the pro's feature a drop back passer and a downfield passing game. Things like the triple option, the veer, and the spread offense have always been important elements of the college game, but never the pro's. Fans want to see quarterbacks taking charge, throwing downfield to talented, fast receivers fighting just as talented and quick defensive backs for the ball.

It is the role of the quarterback that is the difference between college and professional football. If we want to see quarterbacks run modern versions of the single wing we can do it all day on Saturday. But the pro game is different. We want quarterbacks with big arms and sharp brains who can throw downfield and check off at the line of scrimmage. We don't want to see Peyton Manning read the defensive end on the wrap play; we don't want to see Tom Brady rushing the ball twenty times a game. In Tennessee they prefer to watch Kerry Collins than Vince Young, in Cleveland we prefer to watch Josh Cribbs run back kicks than line up at quarterback. We'll let him do that occasionally to play with the defense, but it is not our bread and butter.
Brian Sipe, Frank Ryan, Bill Nelson, Bernie Kosar, they were all pro quarterbacks. I don't think any of them even ran the option in college. Otto Graham was athletic enough to run any offense, but he became the first great quarterback of the modern professional game.
Long term success for the Wildcat, and again as a change of pace offense, might fall into the hands of players like Josh Cribbs or Pat White, multi dimensional players who were successful quarterbacks in college and have better than average arms. Without having a legitimate arm at the tailback spot will allow defenses sooner or later to come up and stack the box when teams line up in the Wildcat.
The Browns have dabbled with the Wildcat with Josh Cribbs. This season, however, with the time he is putting in at receiver, who knows. One thing the Browns did last year when Cribbs went to tailback in a Wildcat formation, they put the quarterback at wide receiver. They did that so they didn't tip their hand with the personnel group. Defensive coaches would have recognized immediately that a quarterback wasn't on the field.
Posted by Greg Cielec at 7:09 AM No comments: 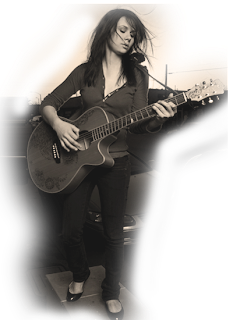 The Hot Club of Cowtown 29 September 2009 at Nighttown

It is great to see the survival and revival of Django Reinhardt style swing jazz in today’s roots music movement. At Nighttown alone over the last few months we have had both the Hot Club of Detroit and the Hot Club of San Francisco perform. Add to the list of “Hot Clubs” (named after Reinhardt’s “Quintette du Hot Club de France” or “Hot Club of Paris”) Texas’s the Hot Club of Cowtown, who doe a pretty good job of channeling Reinhardt’s musical via Bob Wills and other southwestern influences.
Last Tuesday night the Hot Club of Cowtown made their Cleveland debut at Nighttown before a close to capacity enthusiastic crowd. I caught their first set that evening, and it was enough music for a complete show, with sixteen selections that showed off all three members’ musical skills and vocals.
Although Django Reinhardt deserves his due as a guitarist, much of his music that has stood the test of time owes as much to violinist Stéphane Grappelli as it does to Reinhardt’s guitar work. The Hot Club of Cowtown revolves around their fiddler player Elana James, who also does her share of vocals and is the trio’s center of attention with her great smile and very good stage presence. Guitarist Whit Smith does a competent job, as does bassist Jake Erwin. But it is James who gives the trio its magic; she is a terrific musician and has more than her share of stage magnetism.
The song list included jazz and American standards, a few Reinhardt classics, some very good originals, and even a rousing version of “Ida Red,” which is almost mandatory for any swing band from Texas to play. Amongst the highlights was a beautiful version of “Georgia on My Mind” with James opening it up with a haunting fiddle solo and featuring Smith on some soulful vocals. Another standard that shined was “Cheek to Cheek.” The band did not do it in the style of either Peggy Lee or Frank Sinatra, two popular arrangements of the song, but went back to the Fred Astaire arrangement of the 1930’s. A little slower, a lot more romantic. My favorite original was “Eva’s Waltz,” which gave James some room to really show off her musicianship.
This was the trio’s first show at Nighttown, and hopefully not the last. For more about the Hot Club of Cowtown and their music visit hotclubofcowtown.musiccitynetworks.com/. As always, there are a lot of great shows coming up at Nighttown, for a full schedule go to www.nighttowncleveland.com. Shows coming up include local product Bobby Selvaggioand his All-Star Quartet
featuring Kenny Werner on piano on Sunday, Oct. 11; The Four Freshmen on
Tuesday, October 13; and Garrison Elliott and his Swing Band, a six piece group with two female vocalists, on Friday and Saturday, October 16 & 17.
Posted by Greg Cielec at 7:41 AM No comments: