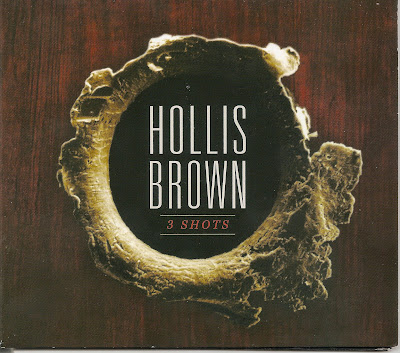 Several weeks ago I was able to attend the release party for this CD in New York City. The music that night sounded great, but I was worried that it might not transfer to the CD. I was wrong. Three Shots might be the stepping-stone Hollis Brown needs to go up another notch or two in the music business.

Hollis Brown has five members, fronted by songwriter/guitarist/vocalist  Mike Montali, who possesses one of the great singing voices in rock music today. The Cleveland connection to the band is bassist/vocalist Dillon DeVito. He is the son of Denis DeVito, leader of the locally popular club/festival band Cats on Holiday. Dillon paid his local dues playing in a series of local bands, including his father’s, before setting off to New York City to join Hollis Brown.

This album is a rock and roll record. It is not the pop country or over synthesized electronic music popular with some young people. This album is the real deal. Guitars, keyboards and a dynamite rhythm section, backing up a singer with a great set of pipes. This could be a big deal. The band on this disk shows a variety of influences, from CCR to Squeeze to Small Faces to Matthew Sweet.

After a series of self released albums, a lot of touring, some success getting songs on TV shows, “3 Shots” is by far their most polished and professional sounding release.  Amongst the highlights are several ballads including “Death of an Actress” and “Mi Amor”; the concert favorite “John Wayne”;  “Sweet Tooth”, with Montali channeling Glen Tillbrook; and the duet “Highway 1”, with Montali sharing vocals with guest Nikki Lane. There is not a weak track on the disk.

Hollis Brown is going to spend most of the summer on tour with the Counting Crows. They will be making a side appearance tomorrow night May 28 at Mahalls in Lakewood. Check these guys out, you might get a chance to brag about it one day.

For more information on Hollis Brown go to www.hollisbrown.com.
Posted by Greg Cielec at 5:36 AM No comments: