Recently I have received several emails complimenting me on concert reviews for CoolCleveland, but also asking me what upcoming shows would I recommend. Several of the emails came from readers whom haven’t yet attended a show at a venue like the Beachland or Nighttown or the House of Blues, but would like to. I looked at the concert calendar for Greater Cleveland and over the next four weeks four shows at three different venues highlight a busy August concert scene. They represent four different genres of popular music, all three acts were outstanding on their last visits to Cleveland, and all would be good reasons to also check out the venues.

On Sunday, August 8 at 7:00 P.M., at NightTown in Cleveland Heights, the jazz outfit Trio, a next generation All-Star group from Los Angeles featuring Julian Coryell on guitar, Karma Auger on drums, & Nick Sample on bass, will be performing. This is a side project for all three performers who currently tour with their more famous fathers. The last time through town they brought a younger than usual crowd to Nighttown and gave a great performance of jazz in the rock-influenced style pioneered by their fathers back in the Seventies.
It can be such a hit or miss proposition when dealing with the offspring of established musicians. For every Rosanne Cash, some one who succeeds despite being in a parent's shadow, there are many who don't. The members of Trio are already seasoned veterans of the music world, and are all talented musicians in their own rights.
My notes from their last Nighttown show describe their music as George Benson meets Rare Earth meets Funkadelic meets Dicky Betts. And, of course, you couldn't help but notice the influences of the elder Auger, Coryell, and Sample. The trio did a great job of keeping the audience's attention with instrumentals with catchy titles like "Nadine," "Beautiful," "The Purple Panther," and "Walking the Dragon." Most of the songs left room for solos and improvisation from all three members. Both the songs and the performance were very good. For more info about Trio visit www.myspace.com/coryellaugersampletrio. To check out other great shows coming to NightTown visit www.ClevelandNightTown.com.

On Friday, August 13 at 8:00 at the House of Blues is the return of all original members of the early eighties super group Asia. During their last show at the House of Blues two years ago, Guitarist Steve Howe, drummer Carl Palmer, bassist/vocalist John Wetton, and keyboardist Geoff Downes put on an outstanding show that included the hits from their landmark early eighties albums; fresh new material from their 2008 CD Phoenix, including “An Extraordinary Life”; and they even went back into the past with a some songs from their original bands (Yes, ELP, King Crimson, the Buggles). They are currently touring in support of their 2010 release “Omega.” Tickets are $35 in advance. For more information about Asia visit www.originalasia.com. To check out all the great stuff going on at the House of Blues go to www.hob.com/Cleveland.

On Thursday, August 19, at 8:00 P.M. at the Beachland Ballroom blues and boogie-woogie legend Marcia Ball and her band return. The Louisiana born, Texas based Ms. Ball is a multiple winner of W.C. Handy awards, and is considered by many the finest blues pianist performing today. This is a chance to see one of the greats of today’s blues and roots music scene. Tickets are $25 in advance and will go fast. For more info about Marcia Ball visit www.marciaball.com. At her last Beachland show the full house in attendance loved every minute of it, whether it was sitting still listening to a beautiful ballad or up on their feet dancing to a boogie number.
Often praised for her piano playing, she is just as good of a singer, whether it’s a New Orleans dancing in the street number or a soulful version of Randy Newman's "Louisiana 1927." Marcia Ball is truly one of the living legends of American roots music.

And closing out the month, also at the Beachland, is the August 21 return of the Paul Thorn Band. A Paul Thorn show is part old time revival, part roots music, part blues show, part rock and roll concert. He is becoming another one of those Cleveland darlings, a regional artist from somewhere else who comes through town once a year or so, and solely by word of mouth each time the crowd gets a little bigger. He is from Tupelo, Mississippi, and is a great songwriter, a solid performer, and an American musical original. His observations of the world around him are priceless. If there was any justice in the world, he'd be sitting on the top of the music industry. For more about Paul Thorn and his music visit www.paulthorn.com. As always, there are a lot of great shows coming up at the Beachland, visit www.beachlandballroom.com for more information.

I highly recommend each of these shows for a great night out of live music. All three clubs have pretty extensive websites with directions, places to park, and lists of upcoming events.
Posted by Greg Cielec at 9:57 AM No comments: 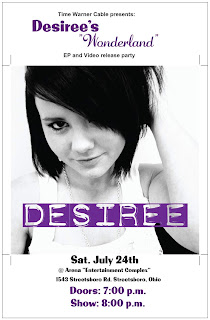 Over the last several years singer/songwriter Desiree Boardwine has been a pretty busy young lady. Besides graduating high school in the spring of 2009, and attending college full time this past year, she has taken bands to the Tri-C Rock Off Finals twice at the House of Blues; lead her family onto national television by making the finals of the CBS Morning Show Best Family Band in America contest; and just recently won the Grand Prize in the Time Warner Cable Random Acts of Music Songwriting Contest.

She has also just finished her first CD release, a five song EP titled “Wonderland.” On all five tracks she is joined by a group of young but seasoned area musicians, lead by guitar virtuoso Brian Poston and her brother Brett on keyboards. She is a very talented songwriter, and her music shows a lot of originality as well as influences from Pat Benatar to Janet Jackson.

On Saturday, July 24, at the Arena in Streetsboro she will be headlining a release party for both her CD and the professionally done video which was one of the prizes in the Random Acts of Music contest. Doors open at 7:00, with music starting at 8:00. Special guest will be Los Angeles based singer/songwriter Amy Kuney, who has had her music featured on MTV, One Tree Hill, and the Gilmore Girls. Opening act will be The Crazed. The Arena is located in the Streetsboro Plaza, at the intersection of Route 14 and 303 East in downtown Streetsboro.

Tickets for the evening are only $12 at the door, and if you bring a copy of this article you will get in for half price. 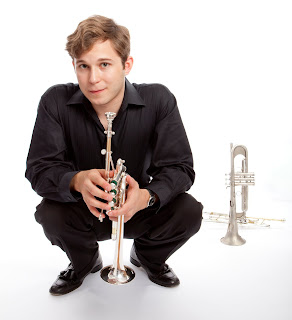 Josh Rzepka has had a busy last couple of years. Besides finishing his Masters at Boston University in musical performance (after a degree in music from Oberlin), he has released two solid CDs of music. The first "Midwest Coast" is filled with ten original compositions of various jazz styles, while the second "Baroque Music for Trumpet" is made up of 17 tracks of traditional classical music. Quite a contrast, but this young man from the Akron is talented enough to pull both of them off.
"Midwest Coast" finds Rzepka fronting a talented quartet with local keyboard legend Jackie Warren on piano, Peter Dominguez on bass, and Ron Godale on drums. The music on the disc ranges in influences from Latin America to Harlem. "Boroque Music for Trumpet" finds Rzepka playing melodies written by Handel, Vivaldi, Purcell, and Telemann amongst others. He gets a little help from soprano Rebecca Freshwater on a beautiful version of Handel's "Let the Bright Seraphim."
On Thursday, July 8, Rzepka will be performing selections from both CD's at NightTown in Cleveland Heights. He will be backed by the band who recorded "Midwest Coast" with him. If you want to see one of Northern Ohio's most promising up and coming talents I'd check out this show.
Photo by Robert J. Saferstein.
Posted by Greg Cielec at 2:15 PM No comments: