(My friend Rick Hurst has started a publication The Real Deal, a sports related magazine for the northern suburbs of Detroit. I contributed the following article for their October issue, it might become a regular monthly feature.)

Posted by Greg Cielec at 3:17 PM No comments:

"Can't Get Enough: the Photography of Robert Alford." Rock and Roll Hall of Fame and Museum

When you head down to the Rock Hall to see the Grateful Dead exhibit, make sure you save time to go down to the lower level to the Patty, Jay and Kizzie Baker Gallery and check out the exhibit “Can’t Get Enough: The Photography of Robert Alford.” Alford is a Detroit based music photographer who has covered the national rock scene since the late Seventies, doing a lot of work for Creem Magazine. The exhibit, put together by curator Howard Baker, features portraits and on stage shots of artists as diverse as the Clash, Morris Day, the GoGos, and John Mellencamp. Music fans will recognize often used portraits of Mellencamp and Boy George; a shot of the Clash in front of the original Motown Records building in Detroit;  and pictures of Z.Z. Top in all their 80’s glory. Other photos include great images of Cheap Trick, Stevie Ray Vaughan, and Big Country.
Alford attended a media event last week to preview the exhibit to the local media, and he was quite affable and informative. He did make some insightful comments on the demise of his profession as a concert photographer. “Now they give everyone in the audience a three song window to take pictures,” he said. “And that’s it. No  one, including me, gets access like we use to.”
“Can’t Get Enough: The Photography of Robert Alford” exhibit will be at the Rock Hall through the winter. The Grateful Dead exhibit will be there until December. For more information on either exhibit, and all the other great stuff going on at the Rock and Roll Hall of Fame and Museum, go to www.RockHall.com.
Posted by Greg Cielec at 8:06 AM No comments:

Posted by Greg Cielec at 5:29 PM No comments:

Except for winning our game Friday night, Sunday was the best day of our trip. We started with mass with families, alumni, and administrators at the Chapel of the Catholic University of Ireland; brunch at the National Concert Hall; then a trip to the semi-finals of the All Irish Gaelic Football Tournament.
Posted by Greg Cielec at 2:48 PM No comments:

Amongst the things we did today was attend the Notre Dame vs. Navy game in Aviva Stadium in downtown Dublin.
Posted by Greg Cielec at 3:59 PM No comments: 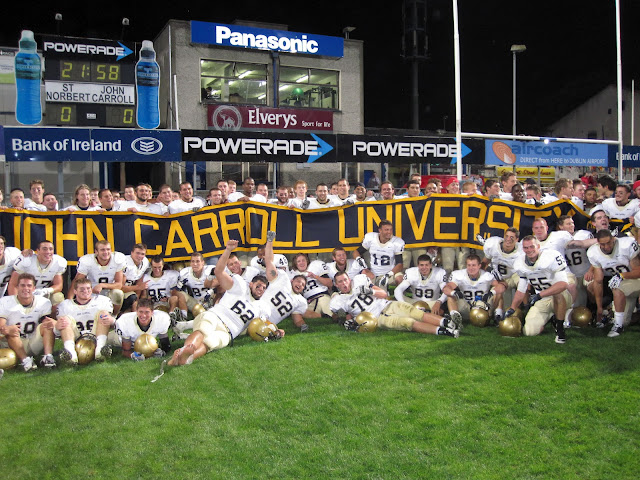 We left Cleveland on Tuesday afternoon, got into Dublin Wednesday morning, and had our team up for pretty much 24 hours in a row. Wednesday's practice was spotty at best. But after everyone got settled in our hotel and got a good night's sleep, Thursday was quite a day. We practiced and then had lunch at the University of Dublin, followed by an afternoon of tourism. We visited the Donniebrook, the stadium we will play in Friday night. It is the home of Dublin's four time world championship rugby team, and it reaks of tradition. One of the best venues we have ever played in. Then we visited St. Patrick's Cathedral and park, and Trinity College. The day was capped off with a parade through downtown Dublin of all the American and Canadian high school and college teams participating in the football festival, finishing with a pep rally on the main plaza at Trinity College.

Posted by Greg Cielec at 3:07 AM No comments: