Posted by Greg Cielec at 6:51 AM No comments: 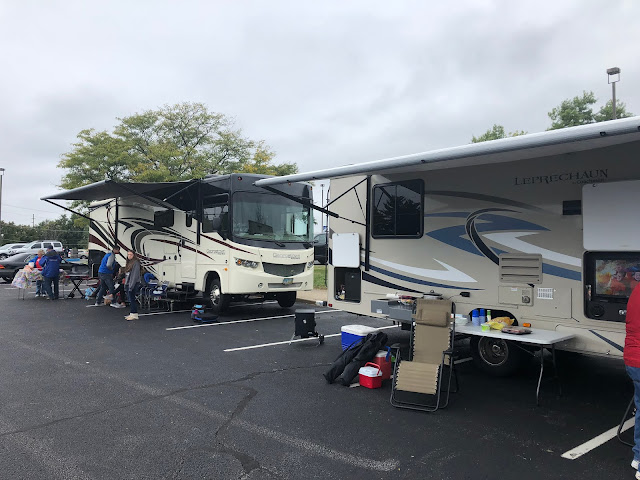 Another Saturday, another big game at a school we had never ben to before. Emory and Henry is in the hills where Kentucky, West Virginia, and Virginia all collide. Absolutely beautiful campus, one of the best I have ever seen, about six hours from our campus. Half the trip was off the highways, as we winded through hills and hollows, and crossed and drove along more than a few rivers. It was a beautiful ride, and after last weekends 12-hour trip back from St. Lawrence it went by relatively quickly.

I’ve been to many campuses both big and small in my day and Emery and Henry is one of the most beautiful. Located on hills, it is a cluster of brick buildings connected by cobblestone walkways. Lots of trees, a duck pond, plenty of green space.
They had a good crowd at the game, and one of the best DIII bands I have ever heard. It made a for a great environment, too bad for them that we lead the whole way on some explosive plays that put us up early and kept us there. Our kicker had a 47-yard field goal and all eight kickoffs went in the end zone, and our tailback had over 200 yards rushing.


On Sunday our team volunteered for the Special Olympics Flag Football State Championships, which took place in our stadium. It was a warm, sunny day with a nice crowd and some great kids participating. As I left our coaching meeting around 2:30 I went out and observed for a while and I could tell most of our kids were really enjoying it and not just putting time in.

The official game report once again courtesy of ThomasMoreSaints.com: 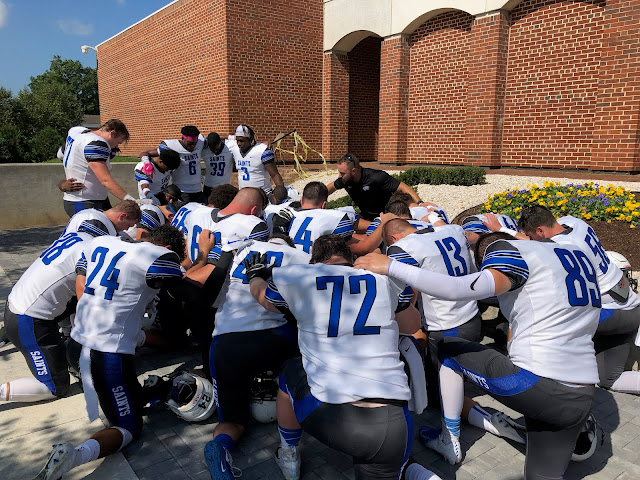 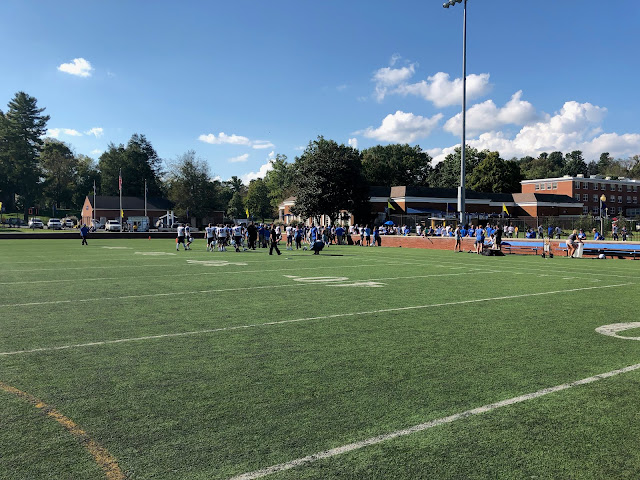 Posted by Greg Cielec at 4:14 AM No comments:

On the way to St. Lawrence University, 12 hours north of our campus by bus, we passed a lot of towns I’ve never heard of…Clifton Springs, Cheerful Valley, Sodus Bay, Port Byron.
It was a beautiful early fall day for football, even a tree or two that started to turn. Enjoyed looking out the window as I listened to some old Jerry Jeff Walker album. It was our first leave Thursday trip and it was hard on everyone. Missed classes, two nights in strange beds, too much road food.
We had to hit the breaks hard when there was a sudden accident in front of us. I’ll write later about the time when we were coaching at CWRU and our driver actually dozed off and one of our coaches had to scream to wake him up. Pretty scary sometimes. Look what happended a few year ago to the Bluffton baseball team.
We took I71 north to 271 over to I90 east , then to I81 north towards Canada. We spent Thursday in a Windham near Erie, practiced at Mercyhurst College, then back on the road. Lunch was at a Pondarosa, how any of them are left?
Friday night we stayed at a fishing/boating resort right on the St. Lawrence seaway. A combination of a motel, lodges, and free standing houses, it had a real old style feel to it. Knotted pne paneling in the rooms, a musty smell in the closets. Real nice people, the only negative is some of the rooms had no hot water, like mine!
On the road when you order pizza for a 90 it is always mediocre. No one can make that many pizzas and have them tste good. However, the pizza on Friday was pretty decent, it was a New York style with large thin crusted slices.
Besides the game, the part of the trip most of the kids and coaches will remember was stopping and seeing Niagra Falls. If you have never been there it is quite the sight, and most on the trip had never been there. We spent on hour there walking through the park on the American side, taking pictures, and enjoying a sunny mid day.
We won the game 48-12.They had a chance. They scored to make it 17-12 us. They went for two, we stuffed them. But on the kickoff we were called for a penalty, so they had us stating our drive inside our own ten. A fumble or interception could give the lead, a three and out would force us to punt and give them great field position. But we once again answered the call, driving 90 yards for a touchdown and we never looked back and they were never back in the game. 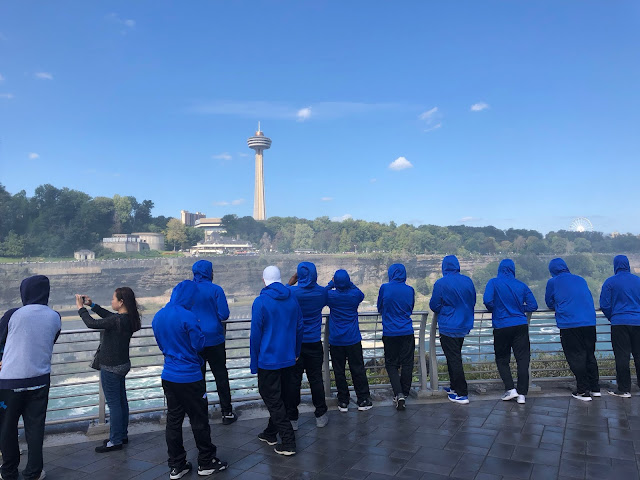 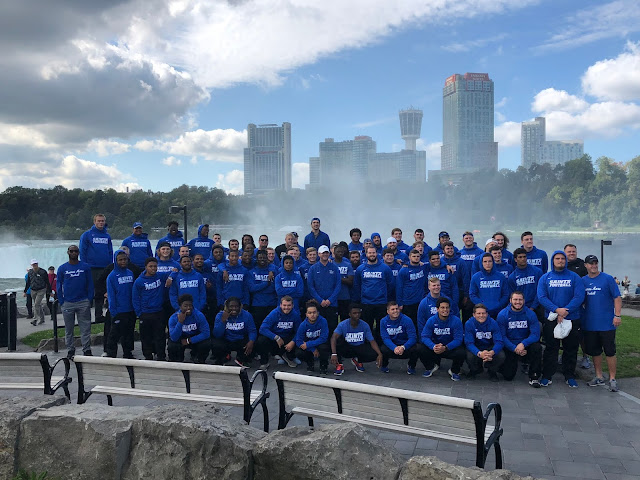 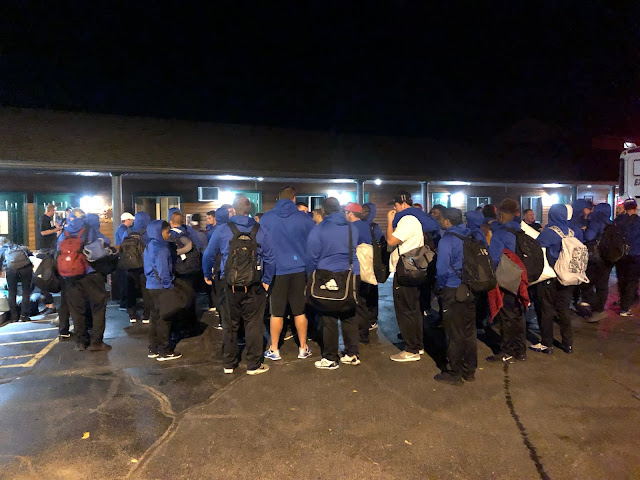 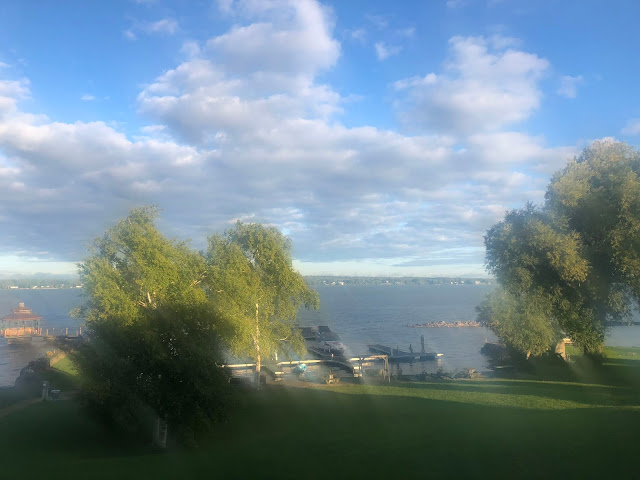 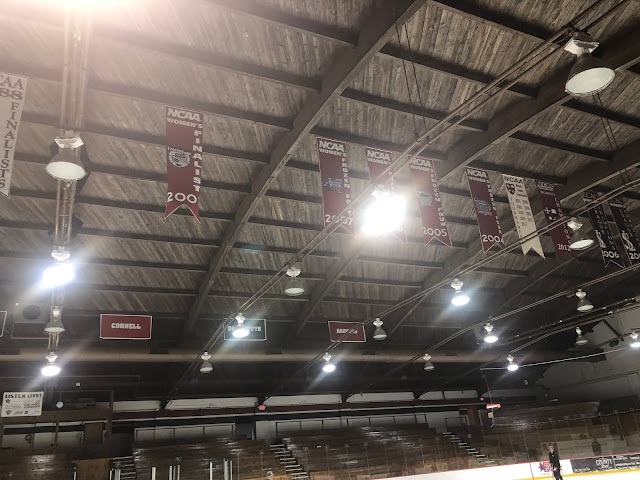 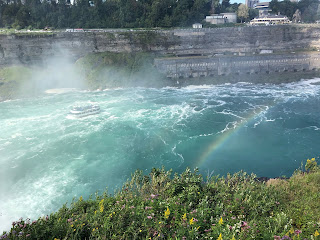 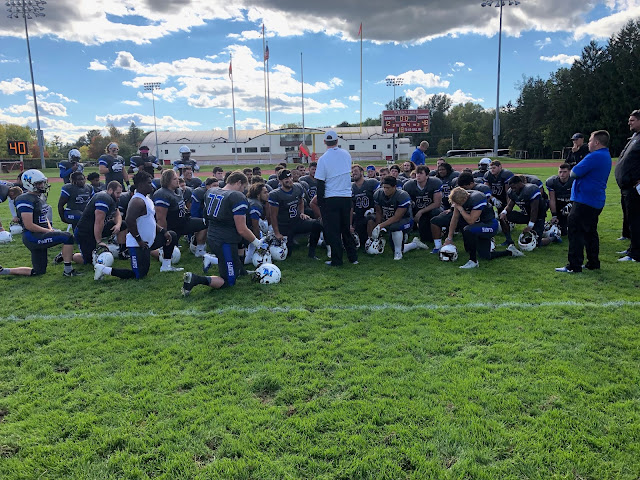 Posted by Greg Cielec at 8:37 AM No comments: