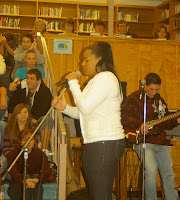 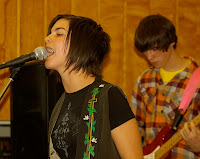 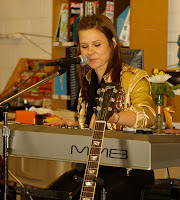 (Below is the article I wrote for CoolCleveland.com about the concert the English Department at Streetsboro High School sponsored on Friday, November 6. What a great day it was! Above the article are some photos from the event, as well as from earlier that day when Amy Kuney was a part of a Poetry Slam we had.)

For a long time Streetsboro High School has had one of the more progressive and active language arts programs in the area. It has the state’s best high school radio station in WSTB (88.9 FM), an award winning newspaper and literary journal, and a very active TV production program. The students at Streetsboro can take a wide variety of electives including radio and television programming, desktop publishing, advanced creative writing, and songwriting; and regularly participate in talent shows, poetry slams, music showcases, and dramatic productions. The language arts faculty at Streetsboro includes a former professional journalist, a former professional radio news director and broadcast journalist, a prominent member of the local music scene and independent record label owner, several published authors, and a freelance writer.
To help fund its creative language arts program, Streetsboro’s English Department, with the help of Hudson Community Recreation and Education, is sponsoring a concert of all female singer/songwriters called “Lipstick and Guitar Licks,” featuring national recording artist Amy Kuney, as well as a supporting cast of popular local acts.

Amy Kuney is a 24 year old singer/songwriter from Los Angeles who has recently toured with Kate Voegele, the Veronicas, and Damien Rice. She and her music have appeared on the television shows the Gilmore Girls and One Tree Hill. You can check out her and her music on YouTube, MySpace, and FaceBook. She has been in front of crowds for over 20 of her 24 years, starting out as a church performer and now does over 100 live dates a year. Her personal life has been colored by sometimes tragic twists and turns. As a teenager living with her missionary parents in Honduras, she and a group of friends were kidnapped by rebels on a Guatemala sightseeing trip. However, these experiences have fueled Amy’s depth of character and songwriting.

She will be in the Greater Cleveland area the week of the show, making presentations at local middle and high schools on songwriting and her adventures in the music industry. Concert organizer and Streetsboro songwriting teacher Jim Boardwine states, “Amy is a suburb lyricist, singer, and performer. She is happy to share her art with others, and we are very excited about this generous visit she is making with us.”

Opening the show will be several popular local artists including Desiree Boardwine, who though just turned 18 has already performed extensively on local television and nationally on CBS’ The Early Show; and Maddie Finn and Stefani Reeder, two of Streetsboro’s finest songwriting students. Proceeds from the show go to support the journalism, creative writing, drama, and songwriting programs at Streetsboro High school.
“Lipstick and Guitar Licks” featuring Amy Kuney, Sponsored by the Streetsboro High School English Department, with the support of Hudson Community Recreation and Education, Hudson Middle School, 77 North Oviatt Street, Hudson, Ohio. On Fri 11/6, Doors open at 6:30PM, music starts at 7PM. For more information about this show, directions to the venue, and to buy tickets online, go to http://www.ReverbNation.com/GatewayCityRecords, or contact Jim Boardwine at jboardwineATrockets.sparcc.org or 330.283.5158.
Posted by Greg Cielec at 6:45 AM No comments: