Michael Stanley and the Resonators, The House of Blues Cleveland, 18 December 2009

By the time the spring of 1980 had rolled around, I had lived a dozen lives with Michael Stanley and the various forms of his band. It had been almost seven years since I first heard the studio version of “Let’s Get the show on the Road” from his solo album “Friends and Legends.” It was the great David Sanborn sax solo that first caught my ear. The first MSB album had “Old Dancin’ Fool,” on it, a lost gem that still reminds me of some long ago friends from that time in my life. The next album had the Jonah Koslen make out on the couch classic “Waste A Little Time on Me.” But it was the next album that blew me away, it was the next album that should have made MSB big time. I’m talking about “Stagepass,” and to this day it is still a favorite of mine.
But "Stagepass" didn’t make them international stars, just in fraternities and dormitories from Bowling Green to Athens to Oxford. The next two albums were missing something, there was too much over dubbing of the vocals, too many bells and whistles. The best songs on both “Cabin Fever” and “Greatest Hints” sounded great live, but didn’t have the guitar and honest vocal sounds the earlier albums did. A lot of fans blamed the change on Jonah Koslen, and later Daniel Pecchio, leaving the band. But the new guys seemed to show their talents live, it just didn’t come across on the records.
Then in the spring of 1980 the band came to central Ohio on one of the mini-tours they always did around the Midwest when a new album was due. And it was at the Dixie Electric Company in Columbus (yes, there was one there too), with a bunch of my frat buddies from Ohio Wesleyan, that I heard most of "Heartland" for the first time. I left there that night totally convinced the album was going to be a million copy seller, the one that would put MSB and Cleveland on the musical map for sure. “All I Ever Wanted,” ‘Lover,” and “He Can’t Love You” were all going to be top ten hits. Kevin Raleigh had finally shown he was a worthy replacement for Jonah Koslen, Rick Bell, “The Cleveland Horn,” was with the band full time and wailed on the sax parts that Clearance Cleamons played on the album, and the over all band was as tight as it ever was.
There were great things on the horizon…and I also thought at the time Brian Sipe was going to lead the Browns to the Super Bowl, and Joe Charboneau was the next Mickey Mantle, and we all know how everything turned out. But instead of a million, Heartland did sell a couple hundred thousand copies, and its success kept MSB in business for a few more years.
Thirty years later, "Heartland" is still a solid album. It’s guitar lead basic rock and roll, with some pretty good song writing and musicianship. This version of MSB would be the most popular, never quite reaching national acclaim but doing pretty good in the homeland and a few other markets. Listening to the album from beginning to end and most of the songs stand up to time. It only seemed natural that Michael and his current band The Resonators would do a Heartland tribute.
Last Friday the first of two Michael Stanley and the Resonators holiday shows featured songs from "Heartland," as well as a few new tunes and a whole bunch of old ones. It was a very good night of rock and roll, and it was enjoyed by the players as much as the audience. Among the "Heartland" songs performed included "All I Ever Wanted," " I Never Needed Anyone," "Don't Stop the Music," "Voodoo," and of course, "Lover" and "He Can't Love You."
Amongst the Stanley standards were "Rosewood Bitters," "Midwest Midnight," "In Between the Lines," and "My Town." The best of the new tunes was the night's opener, "It's All About Tonight," from an untitled album coming out soon. Amongst the surprises were a Bob Pelander piano number called "Smokem, if you Gottem," that did a great job of leading into "Let's Get the Show on the Road," and a return to the 1980's version of "Strike Up the Band" as the nights last encore, with Pelander on vocals for most of it, and the crowd singing along to all of it.
This version of the Resonators has been with Michael Stanley longer than any version of MSB, and it is a talented and tight group of musicians. Here's to hoping we get to spend a lot more Christmases together.
Opening act Colin Dussault gave the crowd forty minutes of rock and blues standards, with his great barrelhouse vocals and harmonica playing. When you got a chance, check him out playing around town almost any weekend, go to colindussault.com for a list of shows.
Michael Stanley and the Resonators will do one more holiday show at the House of Blues, this Saturday, December 26. It's a request night, with fans picking their favorites at MichaelStanley.com. Showtime is at 8:00.
As always, the House of Blues has some great shows coming up, including Rusted Root on December 30, Buddy Guy on New Year's Eve, and Yes coming in January. Check out their calendar at www.hob.com/Cleveland.
Posted by Greg Cielec at 8:21 AM No comments:

A Christmas Story at the Cleveland Play House 3 December 2009 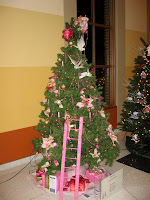 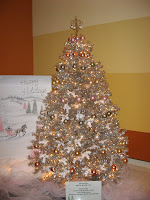 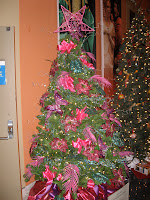 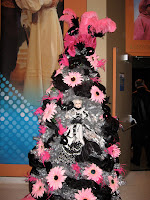 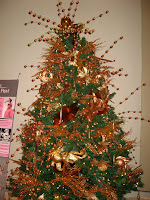 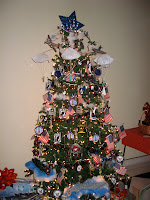 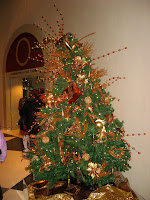 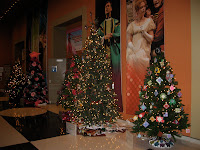 There are many good reasons to stop by the Cleveland Play House this month and see “A Christmas Story,” but two stand above the rest: the fact that the Playhouse will not be doing the play next season, and the Play House’s soon move downtown to their new home.
I’m not sure of the reason why it isn’t in their plans for next year, because the Play House’s production of “A Christmas Story” has been really good since they started performing it five years ago. Just like the movie we all know and love, you never get tired of seeing it. Laughs are anticipated, lines are said out loud (“Fra-gil-lee!), and everyone leaves with a good feelings and smiles on their faces.
With the influx of some new, younger actors, this year’s production seems a bit fresher than the last few years. The last group of young actors who covered the last few years were very good, but at the end seemed to outgrow their parts a bit. This year newcomer Joey Stefanko is a very good Ralphie, and Matthew Taylor steals every scene he is in as his younger brother Randy. All of the adult parts are returning actors from previous years and that is fine. For the most part the roles have become theirs, and Charles Kartali as the Old Man lives up to the high standard Darren McGaven set in the movie version of the story.
I’m not sure what is going to happen to the Play House’s Annual festival of Trees when they move downtown, because the lobbies of its Euclid Avenue theaters has been a perfect setting for the annual fundraiser. With over 65 decorated trees this year, this year’s event is as good as it has ever been. Highlight of this year’s event is a 25 foot Rotunda Tree in memory of long time Play House supporter Jack Wiegman, who passed away this past April. The Festival of the Trees display is free and open to the public every day except Christmas Eve and Christmas Day, New Year’s Eve and New Year’s Day. Check the Playhouse website for hours.
A Christmas Story will be in production at the Bolton Theater at the Cleveland Play House for the last time until December 20. Even if you’ve seen it there in the past, check it out again, along with the Festival of Trees, for old time’s sake.
Posted by Greg Cielec at 7:47 AM 1 comment: