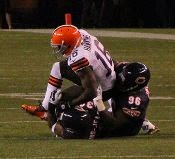 Is it finally here? Are we going to have some real football soon, games that really count? After what seems like the longest off-season ever, only over shadowed by the years we did without, the next Browns game will be for real. Thank God it finally got here. 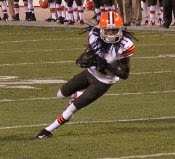 But if the preseason was going to finally end, at least it ended on a mostly upbeat moment as the Browns handled the Bears 33-13 at First Energy Stadium Thursday night. It was a beautiful night, no one of note got hurt, and some fresh faces made a statement or two that they belong on the team. And some questions we were hoping to be answered weren’t quite resolved. In no particular order…
Brian Hoyer and Johnny Manziel both did some decent things that lead to getting into the end zone. For the fourth game in a row, neither one showed they could throw deep. The two best passes of the day were from Rex Grossman to undrafted Willie Snead, the only two passes completed that you could consider downfield. Any attempt by Hoyer or Manziel to throw downfield either missed completely or never got there. Yes, we should be concerned.
Barkevious Mingo continued to impress on defense. The Browns moved him around, and his quickness off the ball was a real asset. He might be coming into his own, and I really like what the coaches are doing to take advantage of his skills. He could be on the way to a big season.
Justin Gilbert and Leon McFadden were tested all night at the corners, and although both got beat more than once both are showing promise. Gilbert is a lock to make the team and play a lot because he was a first round pick, but McFadden has really improved and I think found a spot on the final roster.
When the final roster is posted this weekend, the amount of rookies, especially undrafted ones, making the roster could be significant. Defensive back Robert Nelson has shown some good stuff. So have wide receivers Taylor Gabriel and Willie Snead. There are still a slew of rookies working in on both the defensive and offensive lines. And maybe with the exception of defensive back Pierre Desir who has been hurt, all of the drafted rookies have earned spots.  And how can you keep undrafted running back Isaiah Crowell off the roster?
I hope the Browns don’t cut Conner Shaw, but I’m not sure what they can do with him. They are committed to Hoyer and Manziel, and probably also to Grossman. They are not going to keep four quarterbacks. But I also think they won’t be able to sneak him onto the practice squad. The kid is too good, someone will claim him. Too bad, I really think he has a future in the NFL. I still can’t believe he didn’t get drafted; I have been high on him since I show him play in person last year. To me, he’s a cross between Drew Breas and Brian Sipe.
Good luck to the Browns, and good luck to everyone in their fantasy leagues. The real football season is finally here, and it isn’t a moment too soon. If your Browns Backer Club wants to host “View From the Dawg Pound” for any of the Browns away games contact us at cielec@hotmail.com.
Text by Greg Cielec


Photos by dave Hostetler
Posted by Greg Cielec at 2:44 PM No comments: 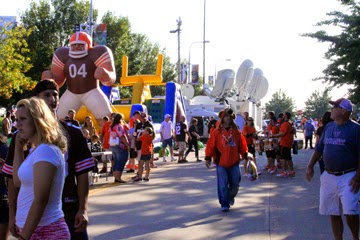 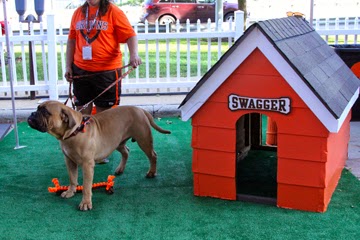 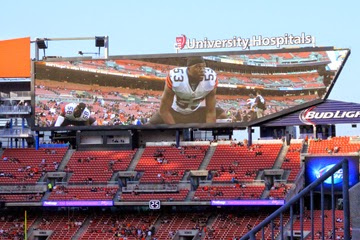 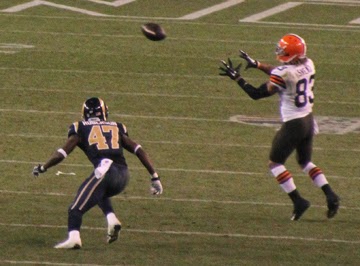 We got to the game early Saturday night to check out the activity outside the stadium and the improvements inside. A lot of other fans also got there early and were enjoying the activities that included live music, zip lines, and all sorts of football related games and booths. The only negative was the presence of only one food truck, a bunch of them would’ve really made things better.
Inside of the stadium you could not help but notice the new video screens in both end zones. Wow! And not only are they clear and colorful, once the game started they replayed ever play, good or bad, including questionable calls by the referees.
We took several laps around the concourse and noticed very little new or out of the ordinary. We wanted to check out the food courts that now feature locals restaurants like the B Spot, but they are located on the club seat level and you needed a special ticket to get near them. Too bad, everyone should be able to sample the upscale cuisine.
And that leads us up to the game. Let’s just say the Browns looked like a team that has had three coaching staffs over the last three years, four in the last five years if you are counting. Indecisiveness on both offense and defense was the rule for the evening from beginning to end.
The offensive stats were ugly, and in reality things were probably worse. Only 32 yards rushing, 146 passing.  Four sacks, only 8 first and third quarter plays. The offense was never really in the game.
Unfortunately, the defense was not much better, with the Rams going up 20-0 in the second quarter and never looking back.
But there were positives. Johnny Football aside, it looks like the Browns had a very good draft.  Cornerback Justin Gilbert, offensive lineman Joel Bitonio, and linebacker Christian Kirksey are all players and will be long time starters, and running back Terrance West will be a solid contributor.
Boh Brian Hoyer and Johnny Manziel did nothing for me. Too much running around, too many short passes, very little continuity highlighted the quarterback play.
Last year after the Trent Richardson trade the Browns offense was screwed. With not legitamate running game it was easy for defensive coaches to game plan against the them. It will almost be the same this year if the Browns don’t show a downfield passing game. If their opponents don’t have to worry about the Browns stretching the field, its going to be another long frustrating season for the offense, no matter who is the quarterback.
But being a Browns fan I’m ever the optimist…its only preseason, there is still another practice game before they go at it for good, and this is the most talented Browns team since their return. It may not seem like it in September, but by midseason this could be a pretty decent team. I have been pleasantly surprised recently by the amount of people who have asked me if I am doing any writing. And it has been a while since I sent out any sort of email about my writing and publishing projects, so I thought it was about time that I did again.
Since 2006 I have written a column for scout.com’s Browns magazine the Orange and Brown Report. Recently scout.com got bought and sold twice and I was unsure of its future. However, we have recently been bought by a magazine group that has the best owner we have ever had, and they are in it for the long run.  They have upgraded both the magazines they own and their internet websites. They have especially done a great job with the magazine I write for. To check out all scout.com has to offer to all football fans, not just Browns fans, go to scout.com or cle.scout.com.
Once again this fall I’ll be writing a game day blog for scout.com call “View from the Dawg Pond.” If you want to read last year’s entries go to my blog at my website www.gregcielec.com.
Our latest publishing effort is a 2014/2015 calendar for Cleveland’s Little Italy neighborhood. The Feast of the Assumption on Mayfield Road in Little Italy is one of Cleveland’s oldest and most popular annual events. This year’s “Feast” is almost here.  It will be followed soon afterward with the “Taste of Little Italy” on September 21. The calendar is titled “Seasons of Little Italy” and features over 60 colorful photographs taken in and around the Murray Hill/Mayfield Road neighborhood. My good friend Dave Hostetler did the design and took many of the photographs and did a great job. The calendars can be purchased at many Little Italy businesses including Presti's; the Murray Hill Market; Washington Place; The Smoke Shop; the Cleveland Montessori School; Topsi Turvi; Guarino's; La Bella Vita; Pennello Gallery; Vitanonio-Previte Funeral Home; the Little Italy Wine Shop; Angelo's Nido Italia; and La Dolce Vita. The calendars can also be purchased online at www.LittleItalyClevelandCalendar.com.
Our other current publishing project The Brown Jug Cookbook is almost sold out. We have less than 125 copies left and we expect them to be gone by Christmas. We have had so much fun with this project, including several events down in Delaware, Ohio, where the Jug was located. Special thanks to Roop Brothers Bar! We do plan on having a Cleveland event around the cookbook in December. Keep checking my website for details. For more info on the cookbook or to order a copy go to www.brownjugcookbook.com.
We are always looking for projects for our publishing company Pink Flamingo Press and Creative Endeavors. Let me know if you got a great idea, we will give almost anything a try if we think it’s a worthwhile project.
I have also been surprised about how many people have asked me recently if I have been writing any fiction and I have. I finished another novel titled A Poem on a Bar Room Wall, and I think it is very good. However, none of the big publishers gave me the $100,000 advance I so richly deserve so we are going to put it out ourselves. Look for it at either Christmas or early next year. There are some sample chapters posted on my website.
Enjoy what is left of the summer.
Greg
cielec@hotmail.com
www.gregcielec.com

Posted by Greg Cielec at 6:41 PM No comments: