I know, I've been very lazy recently posting items on my blog. I'm going to start doing that more often, starting with the following review of my good friend Bernie's band... 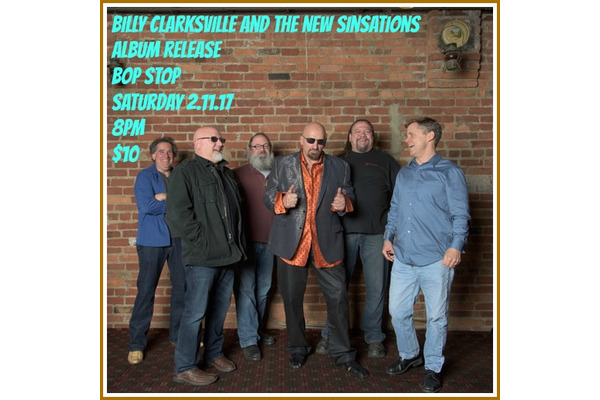 Billy Clarksville is the pen name and stage persona of one of Cleveland’s more popular restaurant owners, Bernie Sokolowski of the University Inn in Tremont. The New Sinsations are a group of guys who have been playing in bands together and with others for over thirty years, including bar bands, garage bands, dance bands, wedding bands, and polka bands. You name it, they have played it. The line up includes Mike Suchecki on bass, Sam Moreman on guitar, J.R. Suttmiller on organ, Ron Hangauer on drums, Gordon Harmon on sax, and Clarksvile on piano and vocals.

Their new album Bound features songs written by either Clarksville or with his writing partner John P. A friend of mine once said garage rock is played best by guys that can actually play, and these guys can play. Guitars backed by Clarksville’s piano playing, along with some solid sax play from Gordon Harmon, gives the band an honest straight rock and roll sound. No gimmicks, no overdubbing. Clarksville’s vocals are a combination of Peter Wolfe, Lou Reed, and Chris Rhea.

There is plenty of Reed and Rhea’s influence in the song writing too. The album’s twelve cuts, eleven of which are originals, take you back to the Tremont of the band’s youth, before the neighborhood was filled with upscale restaurants, coffee shops, and art galleries. Songs like “Road to Hell’, “Lincoln Park”, “City Lights”, and the title track are filled with images of the Cleveland and Tremont of the band’s youth. “Bound” will remind older listeners of the late Jim Carroll.

Billy Clarksville and the New Sinsations will be having an album release party Saturday, February 11, at the Bop Stop, 2920 Detroit Avenue. The $10 ticket charge all goes to the Cleveland Music Settlement. Vinyl and CD versions of the album will be available at the show.

Posted by Greg Cielec at 3:07 PM No comments: