“Out of a Dream” by Trisha O’Brien 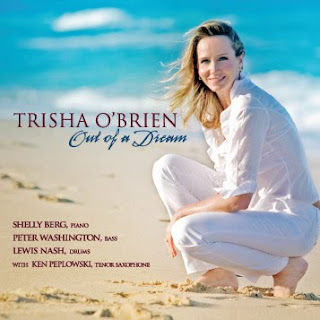 Trisha O’Brien was a mainstay on the local jazz scene before she took the big steps and moved on to New York City and Florida five years ago. Her new release “Out of a Dream” on Azica Records features fourteen mostly romantic standards, backed with a four piece band of jazz pros including Shellly Berg on piano, Peter Washington on bass, Lewis Nash on drums, and Ken Peplowski on tenor sax. Both Berg and Peplowski are long time Cleveland players and Nighttown regulars. Another Cleveland connection on the album is producer Elaine Morton, who has done many things at Telarc Records in Beachwood.
The disk has a great feel to it, with the band giving just enough support to allow O’Brien’s voice to carry each tune. The disk opens with a great version of Nat King Cole’s “Darling, Je Vous Aime Beaucoup,” and ends with the Sinatra standard "In the Wee Small Hours of the Morning.” In between is nothing but good things, including wonderful versions of “Taking a Chance on Love,” “Let’s Face the Music and Dance,” and "Everybody Loves My Baby.”
Trisha O’Brien will be appearing on television and radio on Tuesday, March 2, on both the Fox Morning Show on Channel 8 and on “Around Noon” on WCPN. A Cleveland concert is in the works for this June. For more about Trisha O’Brien and her music visit www.trishaobrien.com.
Posted by Greg Cielec at 8:48 AM No comments: 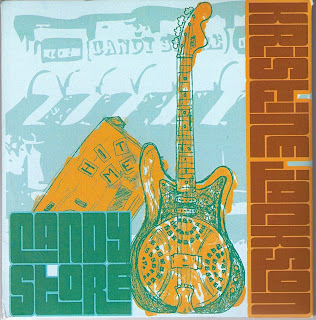 For those of us who first saw her back in her days in Blues on Purpose as a horn player behind Mary Bridget Davis, Kristine Jackson’s first CD of mostly original material “Candy Store” is just another step in the evolution of someone on her way to big things. From horn player to guitarist to vocalist to songwriter to performer of her own material to fronting several different versions of her own band, each step she has taken has been in the right direction.
“Candy Store” features nine Jackson originals along with Tom Waits’ “Way Down in the Hole,” acoustic blues numbers she has been playing in her shows for the last several years. The album is dedicated to her cousin Liz Bohman Szczepanski, who died of Hodgkin’s Lymphoma last year at the age of 27. Kristine will be playing a bunch of CD release dates this weekend in support of “Candy Store,” including Thursday, February 25 at Fat Fish Blue from 7-9, then at the Parkview from 10-12; Seekers Coffee Shop in Middleburg Heights on Friday, February 26; and at West Park Station on Saturday, February 27 from 6-9.
Jackson has always worn her emotions on her sleeve and in her songs, and “Candy Store” is filled with songs of hurt, forgiveness, and recovery. Amongst the highlights on the disk are the title tune, “Baby Girl,” “Hammer Mill 5,”“Wishing Well,” and “What Moves You.” She has really grown into a very good singer/songwriter.
Hopefully the next project in her growth as an artist will be done with a full blues band behind her. For more about Kristine Jackson, her music, and her work with the Kicking the Cancer Blues Foundation, visit www.kjblues.com.
Posted by Greg Cielec at 8:46 AM No comments:

Watching the Cleveland Play house's adaptation of the Fats Waller musical "Ain't Misbehavin'" last Wednesday at the Bolton Theater was like watching this year's version of the Cleveland Cavaliers, too much talent on the floor. From the five leads in the company to the players in the band to the songs in the musical review, this production of this enjoyable musical was nothing but top shelf.
Featuring over thirty numbers mostly from the black jazz era of 20's, 30's, and 40's, not to be confused with the Bing Crosby lead white jazz of the same time period, the play was filled with great dancing, outstanding vocals, and very good costumes and staging. As the company and the band went through not only Waller's greatest hits but those by composers such as George Marion, Jr., Andy Razaf, and others, the audience loved every moment of it, and broke into spontaneous applause often.
The five members of the company that did all the singing and dancing, with more than a healthy dose of humor, are all young regional theater veterans from around the country. Rebecca E. Covington, Angela Grovey, Christopher L. Morgan, Ken Robinson, and Aurelia Williams each showed great skill and talent. Musical Director and pianist Darryl G. Ivey lead a solid band of local musicians that featured trombonist Chris Anderson and drummer Thomas A. Fries.
"Ain't Misbehavin'" is running at the Bolton Theater until February 21, and I highly recommend it. This is the third year in a row the Play House has hit a home run with a musical biography, two years ago it was Ella Fitzgerald and last year it was Mahalia Jackson. This version of "Ain't Misbehavin'" might be the best of the bunch.
The Play House has two productions left in their season. An adaptation of Jane Austen's Emma is running from February 26 to March 21, and Bill W. and Dr. Bob, a drama about the founders of Alcoholics Anonymous set in Akron, from April 9 until May 2. Also upcoming is their FusionFest 2010, their annual multi-arts festival. Visit www.clevelandplayhouse.com for more information on any of these events.
Posted by Greg Cielec at 1:12 PM No comments: