Posted by Greg Cielec at 6:32 AM No comments:

In our win over UWPlattsville Hjavier Pitts scored on a 47 yard run that was all magic. Dave Hostetler caught most of it in a series of photos. Great work by both the running back and by the photographer. 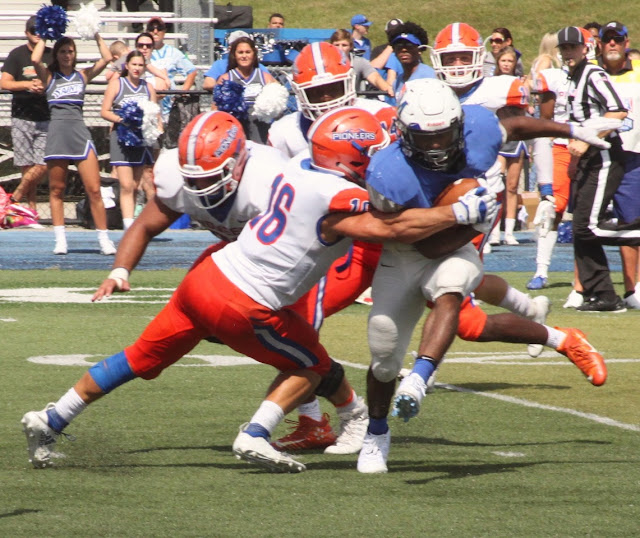 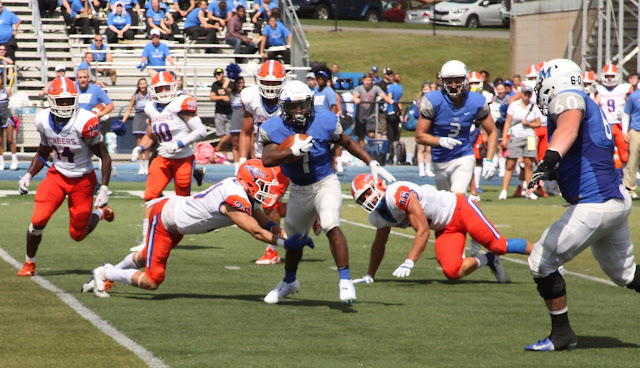 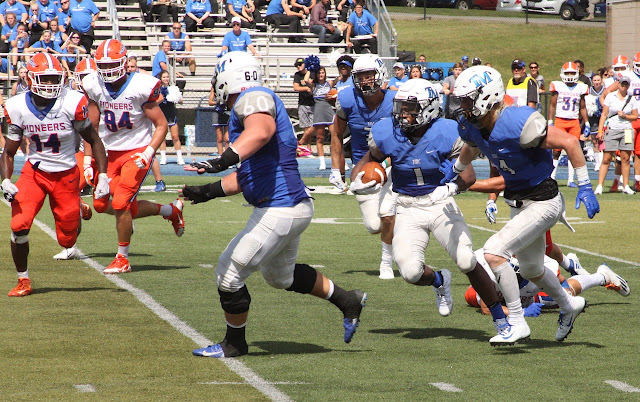 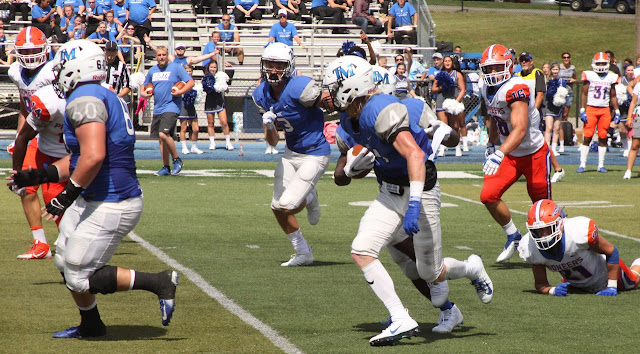 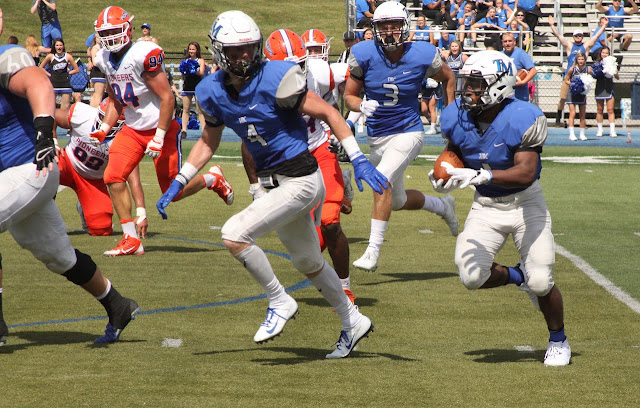 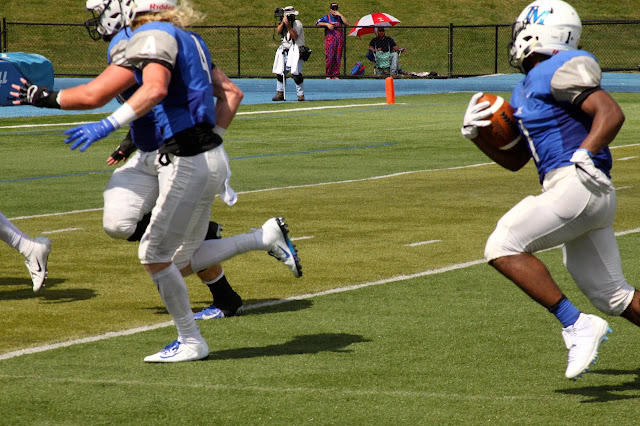 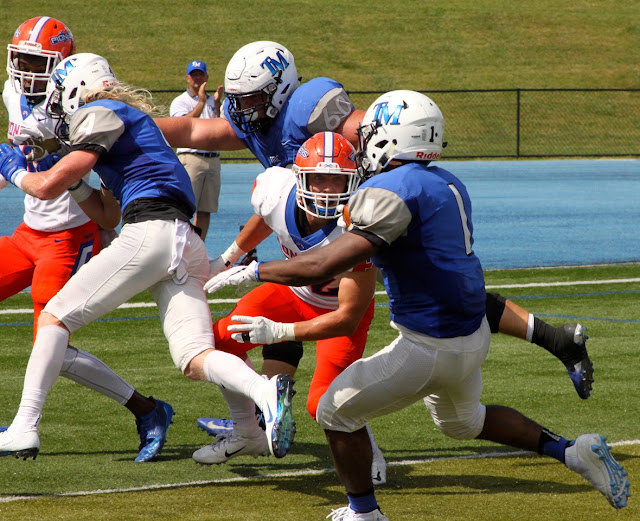 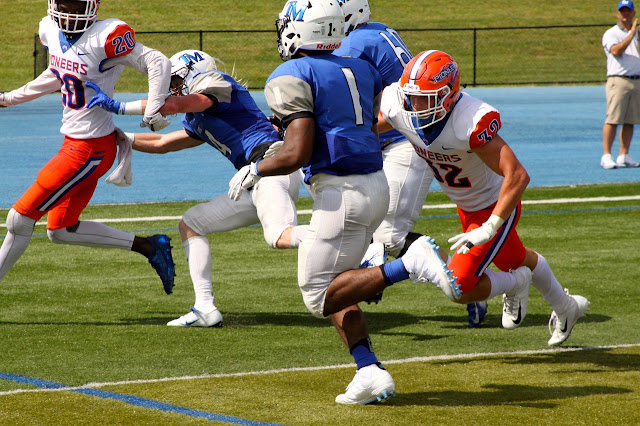 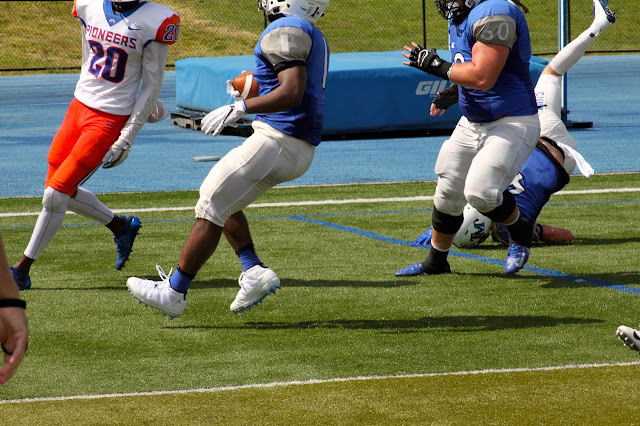 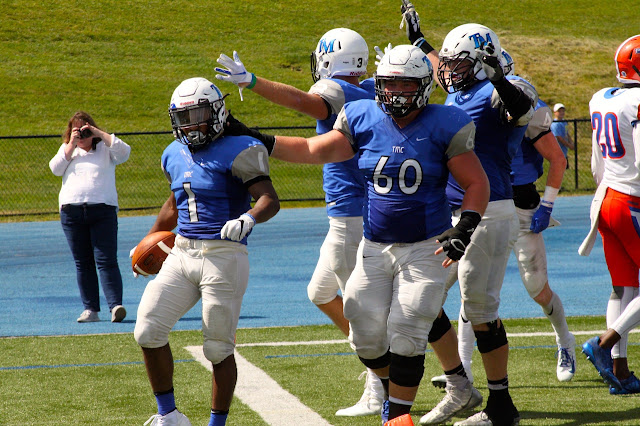 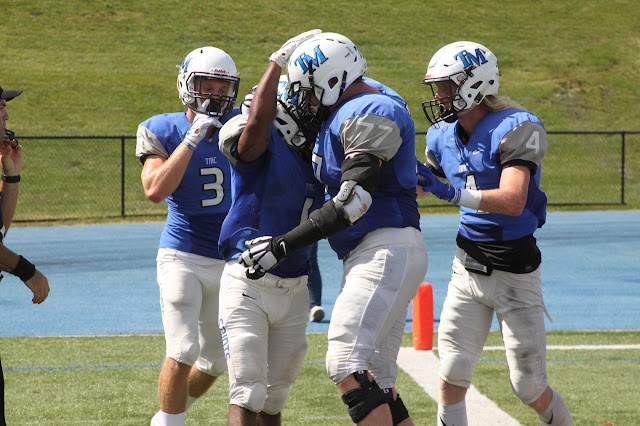 Posted by Greg Cielec at 8:41 AM No comments:

For the second season n a row we have lost one of our better freshmen recruits to a concussion. In both instances the player left home with a warning from their moms, "One more concussion and you are through." Good for them, bad for us. But in the fall of 2018, especially with the implementation of new tackling rules on most levels of football, concussions is something that football has to deal with and won't go away.
This is a topic I will touch on periodically this fall. Below is an article i wrote five years ago for FoxSports magazine division. The one frustrating thing to me that hasn't happened is a national data base of concussions, where athletes are tracked from their earliest signs of concussions up through high school and college and beyond.

(Originally written in 2013 for FoxSports news division)
That one thing that just won’t go away, the never-ending news about concussions. You only have to look at our own Browns to see the effect concussions can have on a team, as quarterback Colt McCoy and tight end Ben Watson both had last season cut short because of head injuries. And it could be argued that wide receiver Mohammad Massaquoi hasn’t been the same since James Harrison laid him out with a concussion two seasons ago. What if McCoy, Watson, or Massaquoi take a big hit to the head early next season? Are they done for the year? Are they done for their career?
Concussions are not just a football or NFL problem. As I write this article rookie sensation Kylie Irvine of the Cleveland Cavaliers has missed a string of games because of a concussion that happened in December. In the NHL hockey’s #1 superstar Sydney Crosby has not played, except for a few weeks, for over a full season because of a concussion he received. No one, including Crosby, has any idea when he will be back. He recently told the Canadian Press, “You have days when you feel like you’re getting better and the symptoms aren’t quite as bad. Other days they’re a little worse.” More importantly, this year a record number of youth league, high school, and college players have missed games in a variety of sports because of concussions. And it is only going to get worse on all levels until it gets better.
This time concussions are not going away, it is affecting too many athletes on too many levels in too many sports, with football leading the way. Popular magazines and websites, as well as serious medical journals, are filled with articles about concussions and football. The mainstream media is also not going to let it go away, with daily newspapers such as the New York Times as well as the major news networks doing regular reports on concussions. If you got the time, go to Yahoo.com and read the article “End Game: Brain Trauma And The Future Of Youth Football In America” by Patrick Hruby, which was originally posted on February 13, 2012. Or go to nytimes.comand read any of the articles written by Allan Schwarz. Both Hruby and Schwarz are serious journalists looking at concussions and head injuries from a very realistic and pragmatic angle. For those of us who love football and have read their writings find the situation very scary.
The comment I keep hearing from people in the medical field who are now dealing with concussions is that football is in trouble. It cannot be ignored, and the more we hear about it the more serious the situation gets. Plus, in a very Watergate-ish slant to the story, stories are becoming public about how the NFL has ignored the situation for too long, that they knew for some time things about head injuries that are just now becoming public knowledge.
That is what the Duerson lawsuit is about. If you remember, Dave Duerson was a Notre Dame grad and former pro bowl safety with the Chicago Bears who committed suicide by shooting himself in the chest last year. His last request was that his brain be studied to analyze the damage football left on it. His family is arguing not that concussions happened, but that information about the severity and long-term affects of concussions was withheld from him as a player so he would continue to play.
And this is not going to go away. This is the third time in the last five years I have written about concussions, and each time because the situation keeps becoming more and more serious.
Drastic things need to happen. To help prevent the long term pounding that linemen take on the head there is a push to outlaw the three and four point stances. Everyone on the field would start in a two-point stance. Many offensive linemen do this already, especially in obvious pass situations. This would keep many linemen from attacking their opponents’ head first, with the top of their helmet taking the first blow.
One thing that is going to happen very soon, and is happening already with some players, is to track concussions over the length of a complete playing career, from the first time a kid puts pads on in CYO or Pop Warner all the way through the pro leagues, including the NFL, the Arena League, the Canadian League, and all of the semi-pro and amateur adult tackle leagues across the country. It would also track any head injuries playing any other sport also.
Something that is going to happen, and there will be a fight over who decides what, is going to be a limit on the amount of concussions a player can have over a certain amount of time, or over the course of their career.   Players like Troy Palamalu can’t keep coming back week after week after suffering head injuries. And if a player has to hang it up after so many concussions, so be it. That has already happened on the high school and college level, and if the NFL really cares about the long-range health of its players it has to happen on that level too.

One final note…everyone who has read my column for the last five or six years that I have been writing it knows that I have been very concerned about concussions and football. I have written two columns about the topic for this publication, as well as writing about it  for other publications and websites as well. I have great concern about a situation that was first written about in the New York Times on August 24 of this year. The Times reported that the NFL possibly influenced ESPN to drop a series on concussions the sports network was doing with Frontline, a public affairs television series often seen on public television.  According to the Times the series described the NFL as “turning a blind eye that players were sustaining brain trauma on the field that could lead to profound, long-term cognitive disability.” The early evidence shows ESPN caving into one of its biggest, if not the biggest, business partner in the National Football League. ESPN has prided itself over the years of not only broadcasting sports, but also being sports journalists. I hope they didn’t cross the line from journalism to corporate greed by pulling the plug on the concussion series because of pressure from the NFL. Concussions will continue to be the biggest story in football over the next few years.
Posted by Greg Cielec at 10:32 AM No comments: 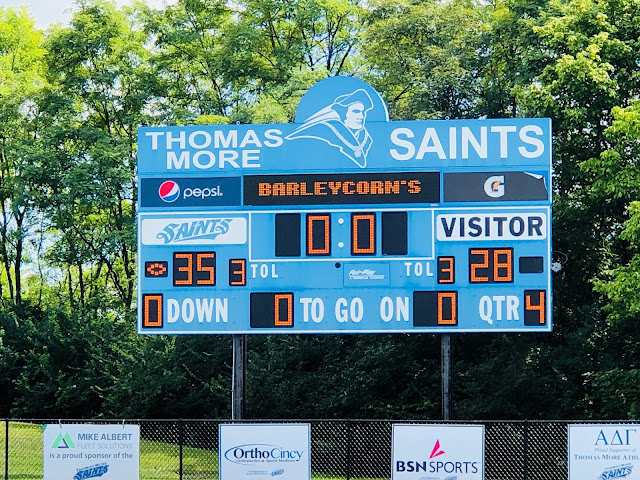 On a beautiful day in front of a great crowd we played one of those games you don't ever forget. Down 21-0 (again!), we rallied for a 35-28 victory against the #16 ranked team in the country. Lots of heroes and highlights, including some great photos by Dave Hostetler.
First time ever playing against one of the Wisconsin public schools. In that state the flagship campus in Madison plays DI in all sports, most of the other state schools/campuses play DIII. It's like if Ohio State was still DI, but Kent State or Akron played DIII. How can they do it? Schools like Plattville do not give athletic scholarships thus qualifying for DIII. For years coaches, players, and administrators have argued over the fairness of this. Schools like Plattsville have eight or nine thousand students, in state tuition, state funding, and usually better facilities. But today isn't the day to debate, more on that at a later time), especially after we enjoyed a big victory against them.
It was great to play at home in front of a great crowd on a gorgeous late summer day. 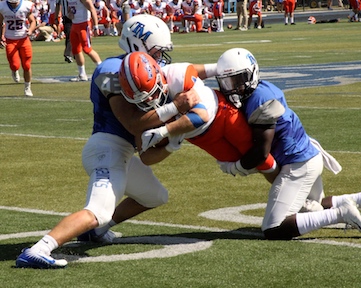 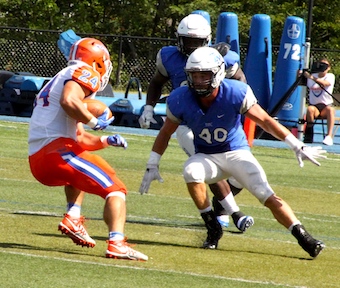 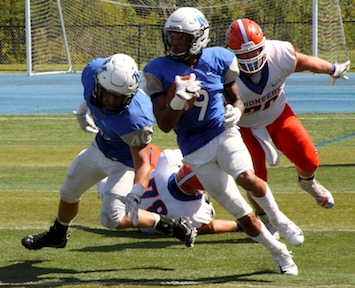 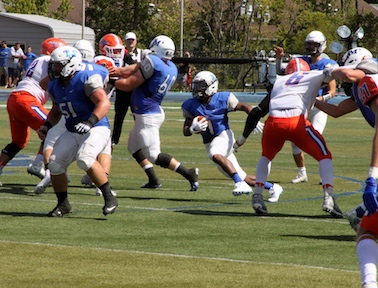 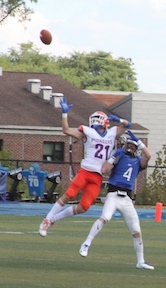 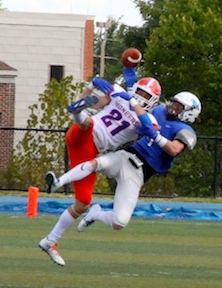 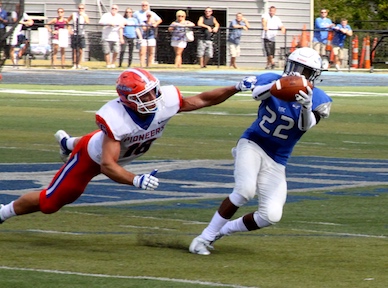 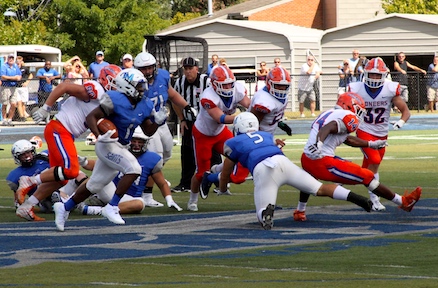 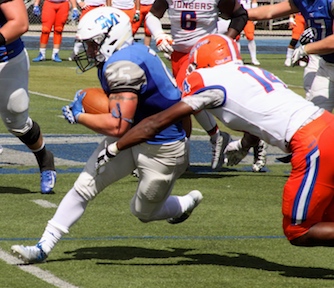 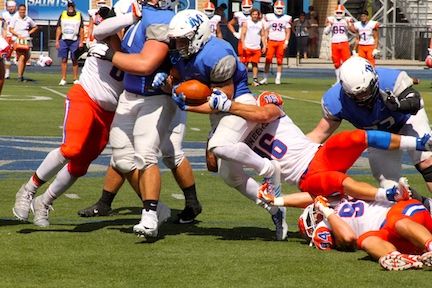 Again, thanks to ThomasMoreSaints.com for the game report below: