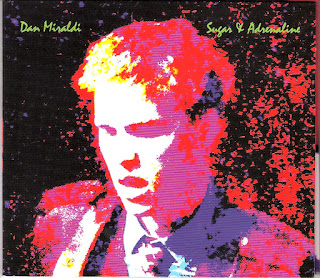 Dan Miraldi’s music is heading in the right direction. The young Cleveland rocker, who has progressed from teen bands to college groups at the College of Wooster, to several post grad projects, has released Sugar & Adrenaline, his second full length CD release, his fourth over all.  Each of the releases has been good, with each one getting better and more polished.
Sugar and Adrenaline is different than the previous three because it was completely recorded with his touring band, and it shows up on the record with a bit more guitar solos by Alex Bowers, drum introductions by Sarah Luffred, and stronger bass lines by Joe Laguardia.
The disk features twelve cuts all written by Miraldi, mostly poppish rock tunes with titles like “Few Rock Harder,” Record Collection,” “Fall in Love All Over Again.” As Miraldi gets older his song writing seems to be heading in a bit more mature vein, and comes through on the last cut on the disc, a ballad titled “The Many Shades of Blue.”
After listening to the album all weekend in my car stereo it reminds me of two similar albums I enjoyed in the past and still listen to occasionally and that have the same feel to it, Matthew Sweet’s Girlfriend (remember with “Winona” on it?), and going way back to when I was Miraldi’s age or younger, the long forgotten classic David Werner’s Whizz Kid.  I hope Miraldi keeps his band together and they keep going, I think they can go to some good places together.
Dan Miraldi and the Albino Whinos will be headlining this Thursday, July 12, in the Cambridge Room at the House of Blues, 8:00 show. I caught the bands last Cambridge Room show and it was very good, check out this one if you can.
Posted by Greg Cielec at 4:41 PM